[All Blu-ray release dates are subject to change up to and after the announced street date.] 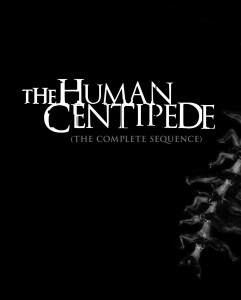 The Human Centipede (The Complete Sequence) – Who would ever have guessed that in 2015, a successful movie trilogy/franchise would be predicated on the concept of eating shit? (No, not Transformers – we’re being literal here, folks.) When the first film in the series made the festival circuit, it was the sort of thing your significant other might slap you for just because you described the premise of three captives sewn ass-to-mouth. A year later, it was being mocked on South Park and became a widespread pop-cultural reference even among those who had never and would never see the movie.

Writer-director Tom Six tried to up the offensiveness ante in each sequel – part two centers on an obsessive fan who makes an even grosser creation using one of the original film’s actresses, while part 3 recasts the original’s Dieter Laser as a racist, misogynist, murderous asshole from hell who yells and tortures and rapes people throughout the whole film. There’s something extremely childish to the whole affair, like a toddler flinging poo from his diaper to see what sticks, but in an era of micromanaged blockbusters and insta-outrage, there’s something refreshingly bracing to it all too, like a round of shots between Lite Beers.

The boxed set includes unrated cuts of all three films, plus the second one in color for the first time.

Army of Darkness: Collector’s Edition – If you’re any kind of Sam Raimi fan, you own a version of this already, but you might find yourself shelling out again: this new set features FOUR versions of the movie: U.S. theatrical, international theatrical (longer), edited/pan-and-scanned for TV version, and the director’s cut with the original ending. Whether you’re a primitive screwhead or an obsessively purist she-bitch, this Darkness has you covered, and you’ll believe in a thing called love.

Mulholland Drive: Criterion Collection – Intended as a TV pilot, then augmented with additional footage to make it a bizarre dreamscape of actress dreams in Los Angeles, Mulholland Drive is many critics’ favorite David Lynch movie, though I remain unconvinced that it was ever intended to “mean” much of anything outside of a long-term series launch that never came to be. It might be about a blue box that alters the shape of reality, or perhaps the dying dream of a never-was who wanted to be a has-been – Lynch leaves a lot open for interpretation, though the new edition includes many additional interviews and extra on-set footage. If you’re a fan, though, the new hi-def transfer is apparently really good. I’m holding out for Lost Highway, myself, which strikes me a as creepier and more coherent take on similar themes.

Monty Python and the Holy Grail 40th Anniversary Edition – It’s only a flesh wound! Ni! The Holy Hand Grenade! What is your quest? She’s a witch – burn her! He is brave Sir Robin, brave Sir Robin, brave Sir Robin…! Ah bleu mah nose at yeu! You manky Scots git! Look, you know all this stuff already. But does your version feature castle packaging and come with a catapult to fling small rubber animals? And does it have Terry Gilliam showing and explaining extra animation bits? Probably not, so you might need this one too.

Phase IV – The only feature film directed by acclaimed credits/poster designer Saul Bass, this sci-fi horror about super-intelligent ants also has a unique place in history as the first movie to ever depict a crop circle. I haven’t seen it since I was a kid, and remember it being weirder than I remembered – now that the original, trippier deleted ending has been found, it my be weirder still; suffice it to say this is not your typical killer bug movie. In a major bummer move, however, this disc does not feature the rediscovered ending, even as an extra – nor any extras at all. It’s still a fascinating oddity, but as such it deserves a little more respect and context.

Pixels – Not remotely the Worst Movie Ever that some have dubbed it, Pixels just sucks mostly because it lazily squanders its potential of nerds versus giant video games come to life. Peter Dinklage is cast as a Billy Mitchell spoof and then wastes every opportunity to actually play the part that way, Josh Gad does horrible karaoke and has implied sex with Q*Bert, Kevin James plays the U.S. president and cheat codes figure into the plot even though there was no way to ever enter cheat codes in old arcade consoles. And say what you will about the Big Bang Theory cast, but they are more convincing as awkward nerds than Adam Sandler will ever be.

The Gift – I’m not entirely down with this Blumhouse thriller about a successful guy (Jason Bateman) made uncomfortable by the re-appearance of his creepy former schoolmate (Joel Edgerton), mainly because it necessitates the Bateman character’s wife (Rebecca Hall) becoming a tool in their battle of wills, as if any of her husbands sins she doesn’t know about somehow excuse her being stalked and sexually menaced. You may read it differently, which is one of the movie’s strengths – like a Neil LaBute movie with dumber dialogue, the film forces you to make the judgments it stops short of rendering. Edgerton, who also wrote and directed, hosts deleted scenes, an alternate ending and a commentary track – these may allay my concerns, or simply reveal too much about the story’s ambiguities. One of you might have to let me know, as I don’t think I’ll enjoy watching it again.

Sometimes They Come Back – Lesser, LESSER Stephen King adaptation for TV in which a teacher is menaced by a ghost gang of greasers from the ’60s. Somehow it spawned two sequels anyway.

Meteor Man – I want to endorse Robert Townsend’s positive portrayal of an inner-city African-American superhero, but it just really isn’t that good, and nobody wants to see Bill Cosby as a mentor figure right now. Rent or buy his Hollywood Shuffle instead.

Sailor Moon R: Season 2 Part 2 – This is what it is. And I’m not going to pretend I know much about it.

Flying Disc Man From Mars – Sometimes, a title is all you need.

Barbie and Her Sisters in the Great Puppy Adventure – Julia made me put this on the list.

Is there anything else you’ll be picking up today?