The 1970s were a goldmine for fans of horror comics. Warren Publishing carried on the torch after EC Comics’ slow demise after the implementation of the Comics Code by hiring many of the best artists and putting them to work on black and white anthology magazines like Creepy, Eerie and Vampirella.

Eerie and its predecessor Creepy owe their very existence to super film fan Forrest “Forry” J. Ackerman who introduced the idea of an in-depth movie magazine to publisher James Warren. The two created Famous Monsters of Filmland, which also included black and white horror comics by Wally Wood and Joe Orlando. Warren decided to expand on that idea, launching Creepy in 1964 and Eerie a year later, utilizing many talented writers and artists who used to work at EC Comics as well as new blood.

The panels and pages below feature some of the creepiest, scariest and down-right craziest moments from the first five issues of Eerie as seen in the Dark Horse reprint volume published in 2009. 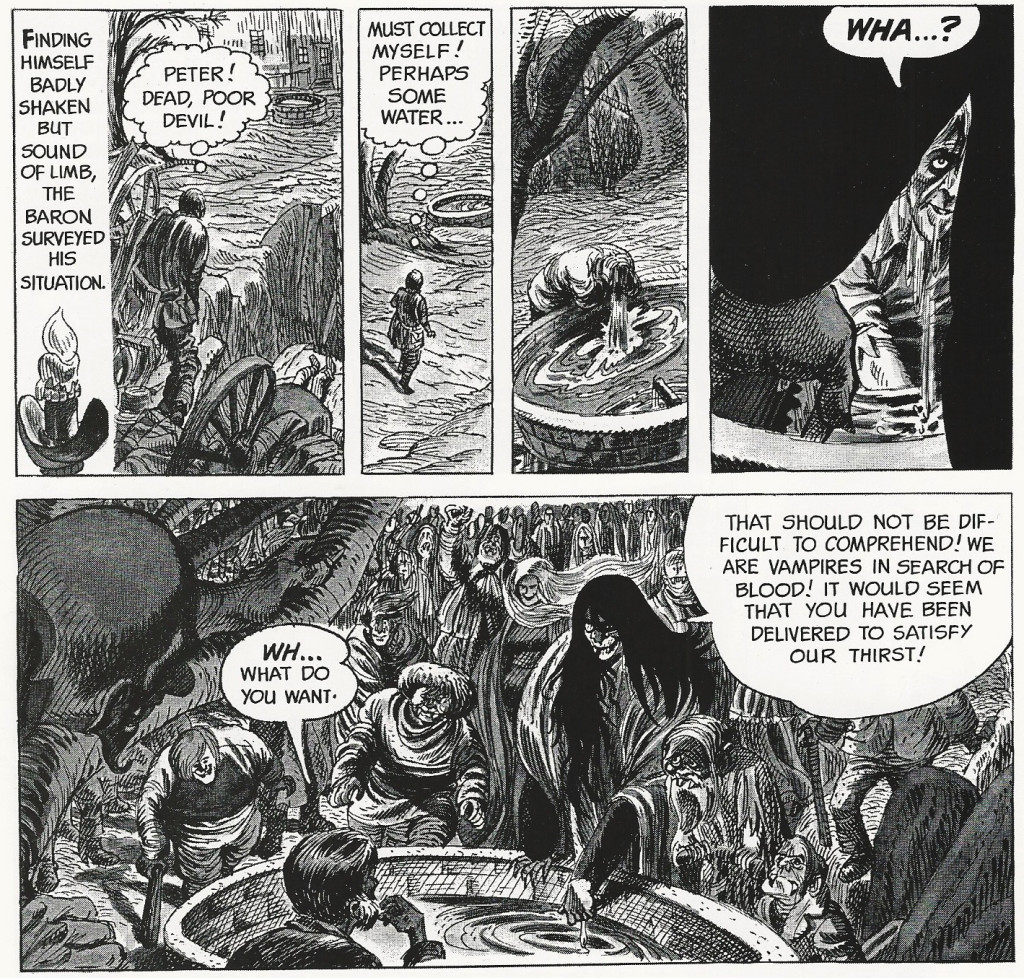 The first issue of Eerie saw print as a 200-copy pamphlet put together by writer-editor Archie Goodwin in just a few days. Warren pushed the publication through so quickly because word had gotten around that someone else wanted to use the same title. As such, the stories therein aren’t as revolutionary and spooky as the rest, but “The Invitation” remains a true bright spot.

Artist Manny Stallman combines an incredible amount of detail with characters ranging from the average to the demonic in this seven page story about a man who tricks people into coming to his house for the hungry vampires who live nearby. Though it leans towards the wordy, the story also features its fair share of excellent reveal panels like this one where an army of vampires pops up right after a man takes a drink of water from a nearby well. One panel, there’s nothing around, the next BAM it’s like offering a free comic at a con, people are everywhere. 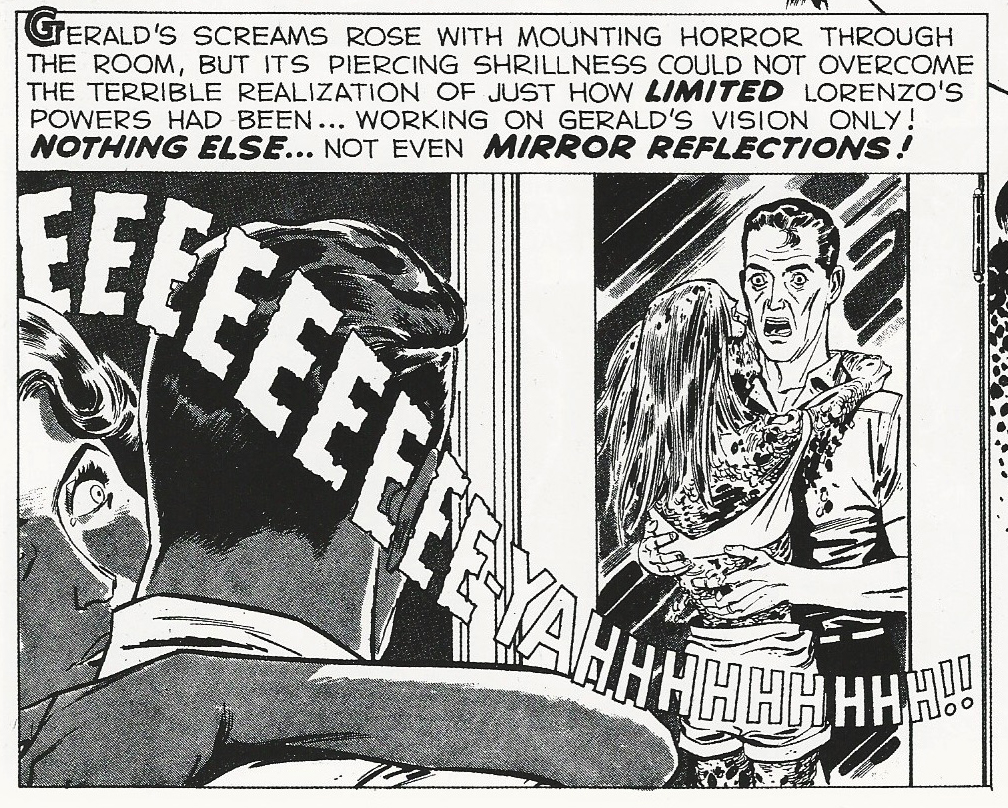 Love can be grand, just not in an Eerie story. In the case of “Eye of the Beholder,” written by Goodwin and drawn by Jay Taycee, Gerald is so broken up about the death of his wife Eve that he turns to the mysterious and magical Mr. Lorenzo to bring her back from the dead. Once Eve successfully returns all seems well until everything she touches (aside from Gerald) starts dying.

What takes this from a possible launchpad for Pushing Daisies and turns it into something far more sinister is this last panel that reveals the truth: ol’ Gerald became so blinded by love that he missed the truth standing right in front of him: that his dear, sweet Eve was actually a rotting corpse! Maybe next time Gerald goes to a warlock who says that corpse revival might be a bit tricky, he’ll listen. 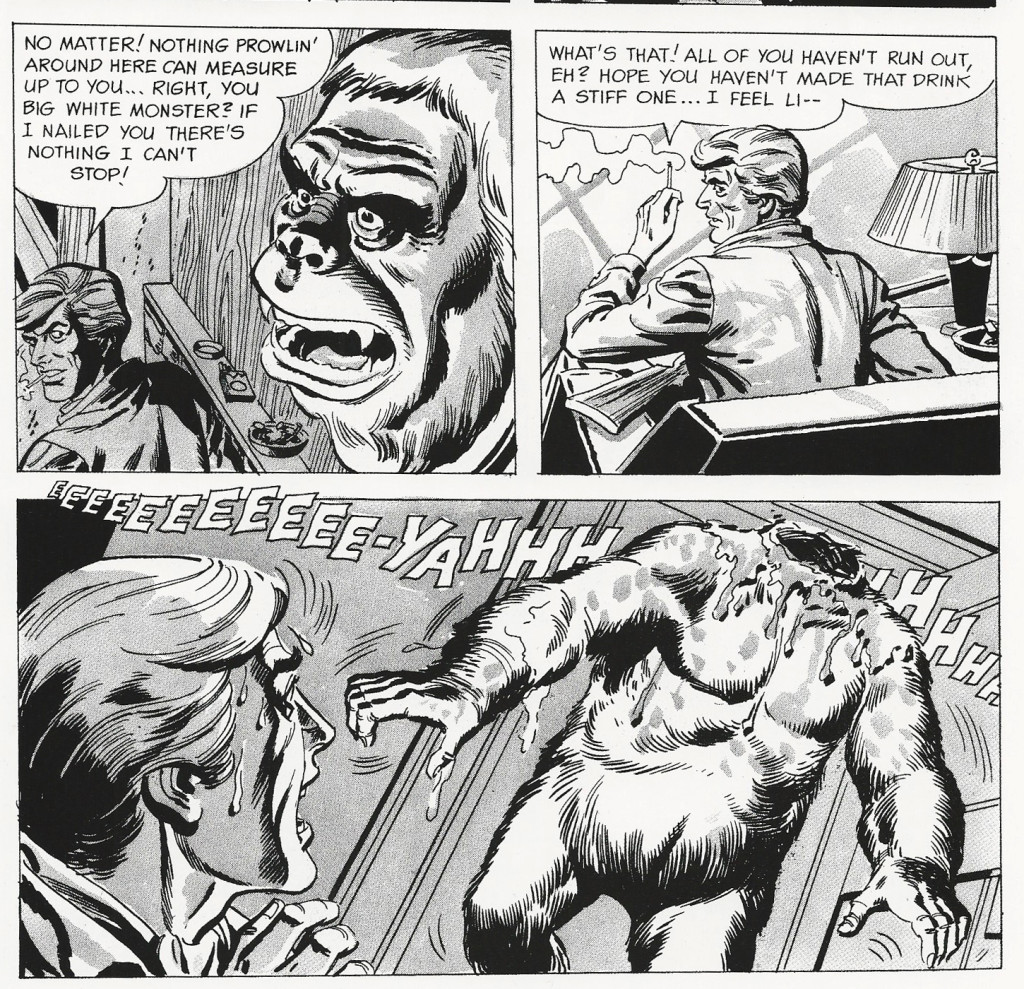 Harry thrives on adventure and hunting. The thrill of the hunt takes him on safari in Africa where he finds himself face to face with an albino ape. Disregarding the advice of his guide, Harry blasts the beast to death, lops off its head and heads back home to mount it on his wall in this Goodwin-penned, Joe Orlando-drawn tale.

The trophy seems like trouble right off the bat as corpses seem to pile up in its presence. One night things get so bad, that Harry’s wife Verna takes off, leaving him alone. Well, not quite alone, as the ape’s decapitated body skulks its way into the room and lifts him up into a surely gruesome off-panel death. By the time Verna returns, Harry’s head sits mounted in the ape’s old spot. With a strong “don’t mess with what you don’t understand” message, “Ahead of the Game” does bring up one big question: how the heck does a headless ape make its way all the way to the States without causing a scene?

Some of the Eerie stories stand out because they feature great scare stories while others shine because they showcase the talents of artists generally known for other mediums. “Room With a View” does both thanks to a script by Goodwin and art by Steve Ditko, the man who helped bring Spider-Man, Doctor Strange, Captain Atom and The Creeper to life. Sure, Ditko had plenty of monster comics under his belt, but we’re guessing he didn’t send a small army of ghouls to terrorize a man named Dexter just looking for a hotel room to crash in.

Dexter demands to stay in the one open room even though the clerk claims “folks are never happy stayin’ there.” One glance at the mirror — which looks like it could have been purchased at the Sanctum Sanctorum’s yard sale — and you know it’s going to be trouble. First, a vampiric old man appears, then a demonic woman and a gaggle of gross gargoyles. Dex tries to brush it off, but before he knows it the truth reveals itself: he’s been sucked into the mirror by the murderous monsters. By the time the clerk arrives upstairs to check on the screams, Dexter’s body has disappeared, but his corpse can be seen…in the mirror. Perhaps the best course of action would be to reserve that room only for the worst customers. 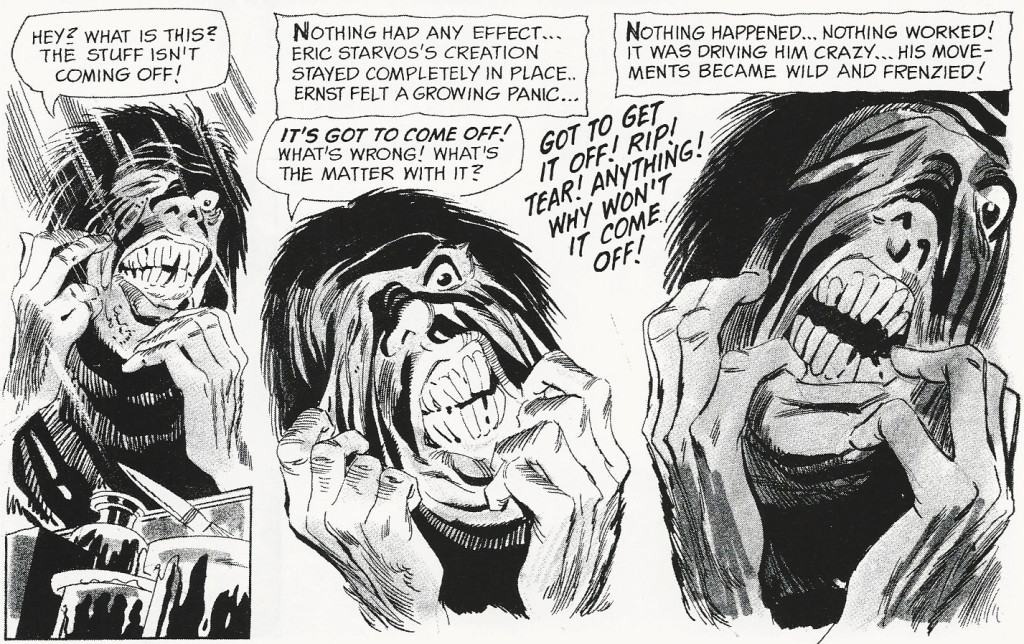 Another Goodwin/Orlando, joint “Under the Skin” stars Leo, a movie special effects artist who can’t compete with up-and-comer Eric. Obsessed with finding out Eric’s make-up secrets, Leo asks for advice. When that doesn’t work, Leo straight-up murders the competition before stealing his notebook and next gig.

However, when Leo goes to remove the most grotesque application this side of Lon Chaney Jr., he realizes it won’t come off. Convinced that this was all part of Eric’s nefarious plan, Leo claws and scratches at his own face, leaving a torn, tattered mess. Before shepherding the reader along to the next tale Cousin Eerie poses an interesting question: was it really stuck or was Leo so plagued with guilt that he did this to himself on purpose? The answer is left to you dear reader, but one thing is clear: there are better ways of coming up with your next monster design.