Menu
Home
>
Blu-ray
>
Blu-ray Today: Inside Out, GoT & Earworms Aplenty 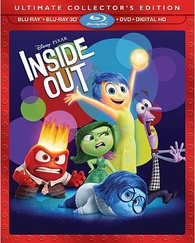 Inside Out – The Pixar movie everybody loved, but the boss was quietly mixed on, gets a Blu ray release just in time for the holidays. The movie follows Riley and the emotions in her head that guide her: Joy (Amy Poehler), Disgust (Mindy Kaling), Fear (Bill Hader), Sadness (Phyllis Smith) and Anger (Lewis Black). Putting aside the relative merit of the movie (which is very good), I’m all about movies that give paychecks to talented comics. Even if they are nakedly emotionally manipulative. My Christmas wish is for a movie that shows the Pixar pitch room brainstorming ways to make a movie theater full of kids and adults cry, only played as a horror movie.

As it’s a Disney movie, there are a thousand different ways and packages and formats to buy this in – in addition to the standard 3- and 4-pack 3D/Blu Ray/Digital combo packs, there are also Target and Best Buy exclusives. PS: This is the first earworm of the day – I can’t see this DVD without thinking of the Diana Ross song.

Final Girls – From the same batch of reviews at LAFF comes Final Girls, where a girl and a group of her friends get sucked into the slasher movie her mom starred in back in the ‘80s. LYT thought it was fine. That it’s PG-13 means it’s either disappointing or we actually have become a permissive, declining society. Probably the first. This edition has commentary from just about everybody, as well as deleted scenes.

Black Sails Season 2 – Or “What If Pirates of the Caribbean had bewbs?” This series follows the pirate crew of the Walrus around the map from Assassin’s Creed: Black Flag as they do more sex and opium and less swimming around shipwrecks in a diving bell.

Roar – Noel Marshall and his movie crew (including Jan de Bont) get mauled by a bunch of lions, and this movie gets a Blu ray release six months too late to quell the mob around that guy who murdered Cecil. There’s a making of featurette, commentaries and a cast Q&A from earlier this year on this edition.

Stung – Showcasing the latest theories in evolutionary science, Stung is the story of wasps that mutate almost overnight to attack a garden party full of high-society waOH I GET IT NOW. This Blu ray release has a making of featurette and commentary.

Game of Thrones Season 1 and Season 2 Steelbooks – If you want these, you probably already have them in some form, but in addition to all the episodes and a bucket full of special features and codes for every digital version imaginable, these releases also come with some cool sigil magnets. Because nothing says “I love your fingerpaints, sweetheart” more than posting it on your fridge with the sigil of the House Targaryen, a family notorious for their nurturing love.

Fairy Tail Collection Five – I have a pile of this manga sitting in my bedroom – okay, it’s actually in a longbox in my basement because it’s been growing since before the move – waiting to be read. I’m going to start that very soon. As soon as I’m done reading this week’s comics. And all the Secret Wars minis. And The New Deal. And that Judge Dredd collection I bought before the move. And the latest Vinland Saga. The point is I’ll get to it eventually, probably long before I watch this…wait shit, Fairy Tail is on Hulu. I’m totally going to watch the show first.

Mobile Suit Gundam Part 1 – I’ve only seen Gundam Wing, so I would appreciate suggestions in the comments as to what I might enjoy from the other Gundam series. What I’m most excited about this is how it’s billed as the first American Blu ray release of the original Gundam show – that HAS to mean that they’re eventually going to get Wing and Endless Waltz out on Blu ray here, too, right? There are commercials and episodes 1-21 in this release.

Doctor Who Series 9 Part 1 – The first six episodes of the season. Wait for the box set.

DC Graphic Novel & DCU MFV Collection – Remember back in August when I talked about these – DC is packaging the collected edition of a comic story with the animated movie based on it and selling them as a combo pack. And now, as what’s likely a holiday release, they’re packing all of them together and selling them for $145. If you’ve got the money and none of these movies or comics, this is a pretty solid deal: it includes Justice League: War; Justice League: Crisis on Two Earths and then three good ones, Superman: Doomsday; Batman: Gotham Knight; and Wonder Woman: Gods and Monsters.

Babymetal Live in London – Have fun getting this out of your head!

Sounds like the kind of song that inspires a rash of really happy suicides in a Twilight Zone episode. SEE YOU IN THE MOSH’SH PIT, TRUE BELIEVERS.