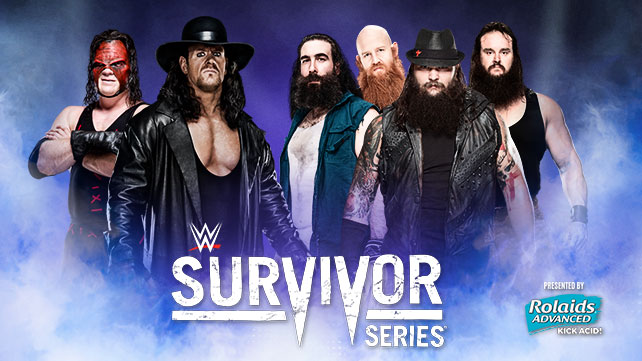 Did I seriously just watch an episode of Raw where the main event was a lucha match, and the closing segment was furthering a Divas feud that had no sex angle?

I think so. Let’s enjoy this opposite reality while it lasts. With no obvious golden-boy successor to take the lead just yet, the ‘E is trying a few different things, and I mostly like what I see. Except for the part where there’s a pay-per-view this weekend and I only know four of the matches…and one of them is worse than I thought it would be.

Yeah. You know how the TV shows have been having “classic” Survivor Series matches, of five-on-five, and four-on-four matches? Know how you thought Undertaker and Kane would need two partners? Well, I just checked the website, and the actual scheduled match is…

“The Undertaker & Kane vs. Two members of The Wyatt Family”

Uhhhhh…last week, Taker and Kane just kicked the asses of all four of them. We’re supposed to think there’s any threat whatsoever in two?

Okay, maybe there was some booking on the fly here. Before Seth Rollins got injured, it seemed like maybe Roman Reigns and Dean Ambrose were going to help Undertaker. Now, one of them will probably become champion instead. But that’s no excuse. A four-on-two handicap match would make sense. Two on two, not so much. I mean, to put it in global terms, it’s like Putin and Obama versus Assad and Khameini. Which is to say the only dramatic tension there is if Putin and Obama can’t get along. Could we see Kane suddenly be a dick? It’s not like he ever renounced his corrupt ways, and that seems like the only way to avoid a snoozefest Undertaker squash.

Owens vs. Neville. Fantastic. Two guys with very basic gimmicks – a scrapper and a stunt dude – giving all they’ve got. Inevitable outcome, but still a joy to see.

Reigns vs. Cesaro. I actually believed at times that Cesaro could win. despite the horrible way the company packages him, it’s clear they’re behind him. Reigns’ promo, simply recapping last week’s plot, was dreadful – but he brought it in the match itself.

Del Rio vs. Kalisto – Freakin’ Kalisto in the main event? Wow. And I mean wow in a good way. These guys did all they could to prove themselves worthy of the last match slot.

Ambrose vs. Ziggler – I dunno; Ziggler matches tend to bore me. This one didn’t change that.

Paige versus Charlotte – Holy Ric, I believed. Charlotte isn’t as good an actor as her dad, but that just made the rage feel more real, especially when Paige brought up Charlotte’s brother Reid’s death from a heroin overdose. Paige’s weird contact lenses – I think – (either that or a bad drug reaction) were distracting, but I bought that these two have a major issue, and for once we have a Divas match to anticipate where the angle isn’t simply “snobbish sex object versus tough girl,” and the actual wrestling is likely to be solid.

Tyler Breeze looks like Christian’s little brother. R-Truth looks like a million bucks for a middle-aged dude (two years older than me, if Wikipedia is right).

I’m reminded a bit of the New Generation era in the early ’90s, after Hogan and Savage defected. Roman Reigns is Diesel, Dean Ambrose is Shawn Michaels, and Cesaro is Bret Hart – all solid, none of them with the charisma of legends yet (Shawn would eventually earn it, but he did it the hard way). We thought we had new icons, and then Austin and the Rock showed up and blossomed to reveal what star power truly was. Whoever the Next Big Thing is…he’s not here yet. But these will be the guys to put him over.