By the time the impenetrable crowd surrounding Paul Kaiju’s DesignerCon booth had dissipated, all that remained on the shelves were a few display pieces and stickers. In a corner, the popular toy artist was surrounded by a small group of people who appeared quite happy to have the chance to speak with him. I was staring at a toy butt on the shelf when a woman approached me. She said that everything sold out by lottery and handed me a sticker featuring one of Kaiju’s monsters.

In the end DesignerCon, an annual art and toy convention held at Pasadena Convention Center, is about the things you missed. A figure of The Cure frontman Robert Smith sold by the time I returned to the booth where I first spotted it. Earlier in the weekend, I ran into a friend who had just purchased a soft Krampus pug. While I stumbled upon a whole booth of pug toys, I couldn’t find that one. A few years ago, I could get through DesignerCon in an afternoon and confidently proclaim that I saw just about everything. This year, I spent two days on the show floor only to come home, check Instagram and repeatedly wonder, “How did I not see that?”

DesignerCon is a weekend-long event packed with stuff. There’s everything from original paintings to art books to greeting cards crammed together inside the booths, but toys are the big draw. We’re not talking about your usual Mattel and Hasbro figures here. This was a haven for the oddball collectibles, like Masters of the Universe and Teenage Mutant Ninja Turtles mash-ups, figures based on paintings and items that are too cute to be destroyed by rambunctious kids. Indie companies like Super7 and Kidrobot set up shop, as did individual artists ranging from local up-and-comers to international toy scene stars. Gargamel, the Japanese collective that used to frequent San Diego Comic-Con, brought their wares to Pasadena. Throughout the weekend, you could catch a glimpse of New York-based bootleg artist The Sucklord roaming the halls. Portland’s Bwana Spoons was surrounded by shoppers every time I passed his booth. L.A. local J*Ryu live painted at Kidrobot’s booth to showcase the artist and toy company’s latest collaboration.

Adults love toys, and that’s not news to anyone who reads The Robot’s Voice. For the artists, toys can serve a lot of different purposes. For some, it’s an exercise in sculpture. For others, a blank toy becomes a canvas. Over the course of DesignerCon, I aimed to understand the connection between art and toys.

1. Growing up Doesn’t Mean Abandoning What You Loved as a Kid. 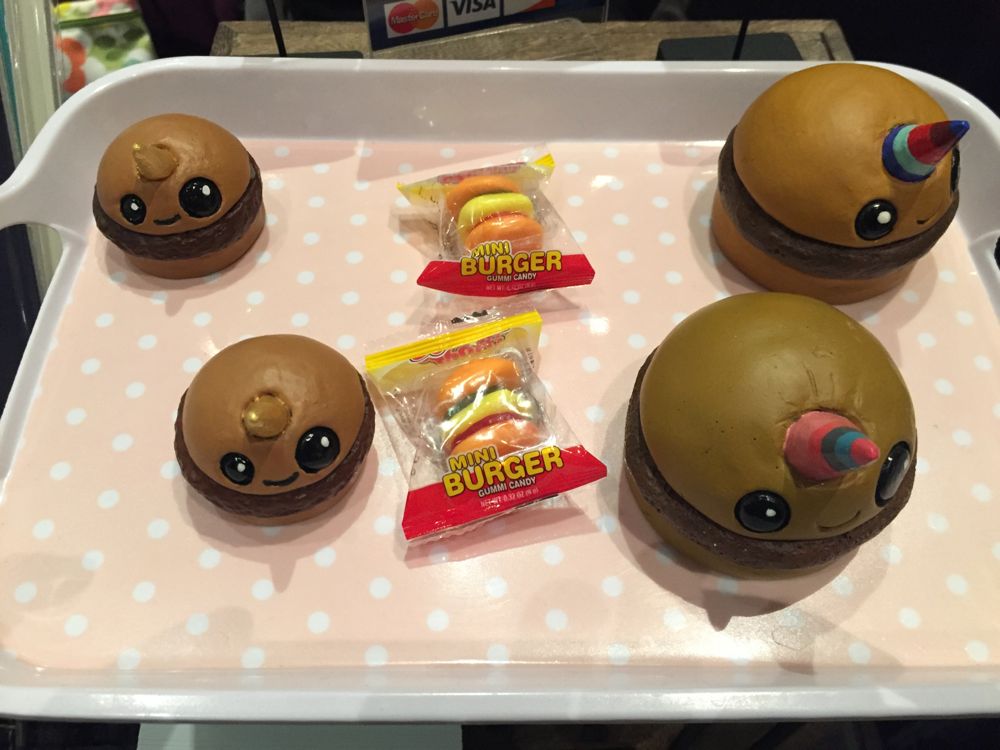 Hana Kim has impeccable taste in adorable art, which you can see on her blog Supahcute and at the art shows she curates in Los Angeles. Last year, she delved into toy production for DesignerCon with a collaborative piece called Burgercorn. The figure started out as a doodle made by her boyfriend, Rodger Revilla. Monster sculptor Vanessa Ramirez turned the doodle into a sticker illustration and then a limited edition resin toy, which Kim and Revilla painted. In 2014, the figures sold out at DesignerCon, so they brought the character back for one last run this year. By Saturday afternoon, it was already selling well.

I asked Kim why adults love toys. “I think it’s just an extension of our childhood,” she said, pointing out that there is “a lot more variety” in the toy world for people who now have their own money to spend.

Maybe some people are critical of the generation or two that are still fascinated with our own childhoods. Considering that my cell phone is protected by a Little Twin Stars case and I braved a theater full of loud little kids just to see The Peanuts Movie, I’m probably the last person who will pass judgment on adults spending a good amount of money on toys for themselves.

2. You Can Make the Toys That Never Existed. 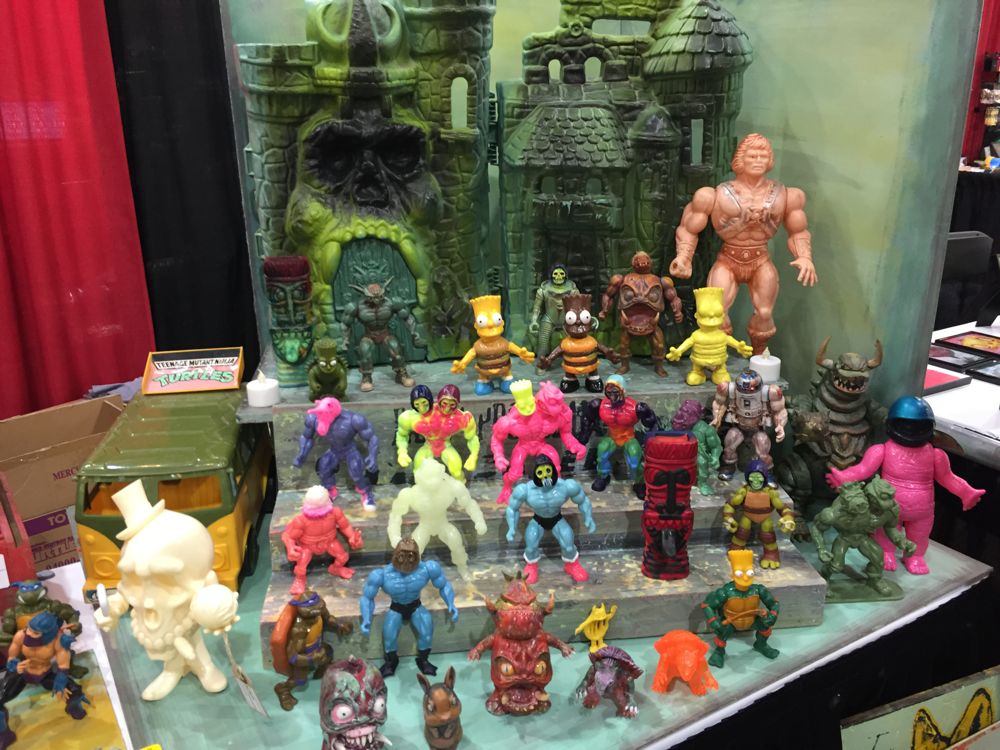 It’s not just shoppers that are tapping into childhood loves at DesignerCon. For artists, working in toys is a chance to make the things that didn’t exist when they were kids.

Utah-based artist Bacee had a booth full of retro mutants lined up in front of Castle Grayskull. Bart Simpson had morphed into a hamburger. R2D2 sprouted Masters of the Universe limbs. A Teenage Mutant Ninja Turtle body fused with Skeletor’s head. His favorite, though, is Bart Simpson and a Ninja Turtle conjoined thanks to a hot pink Masters of the Universe body. Bacee, who also makes screen prints, collected Teenage Mutant NInja Turtles as a kid. He even had a few of his old toys on display at the booth. These mash-up pieces, which he casts and paints himself, are a tribute to characters he digs.

Playing with toys according to franchise is boring. The adventures get far more interesting when you let Barbie and G.I. Joe travel by My Little Pony. So, why not let characters collide? Bring on the ’80s toy chimera!

3. You Can Also Make the Bootlegs That Didn’t Exist.

Agent Wednesday holds a One Dollar Man figure that will be released in February. (Photo: Liz Ohanesian)

DesignerCon wasn’t like a comic book convention; There weren’t many superheroes on display here. When there were pop culture references, tastes tended to lean towards Star Wars, Sanrio and The Simpsons. If you could nail a good nod to The Simpsons, you might sell out of your stash pretty quickly, like Agent Wednesday did.

By Sunday afternoon, Agent Wednesday was offering to draw people as babies and giving away nail decals featuring images of Divine and John Waters. She had sold out of her One Dollar Dude toys midway through the first day of the event, and her second figure in the series won’t be available until February.

“One Dollar Dude is basically Asian Bart,” she said. The concept came out of a piece she did for an art show in New York, where Agent Wednesday lives, a few years ago, and was inspired by bootleg Bart Simpson merchandise. “I realized there was no Asian one and I’m Asian,” she explained.

The figure didn’t actually cost a dollar. “It’s called One Dollar Dude because he’s the guy selling bootleg DVDs for a dollar,” she clarified. Her DesignerCon edition of 15 hand-painted toys sold for $45 a pop. Next up is One Dollar Dude as a dim sum waiter. Agent Wednesday had a prototype of the toy, whose release will coincide with Lunar New Year, at the booth, but says she hasn’t set the price or edition number yet. Three more One Dollar Dudes will follow and Agent Wednesday is keeping their identities a closely guarded secret. 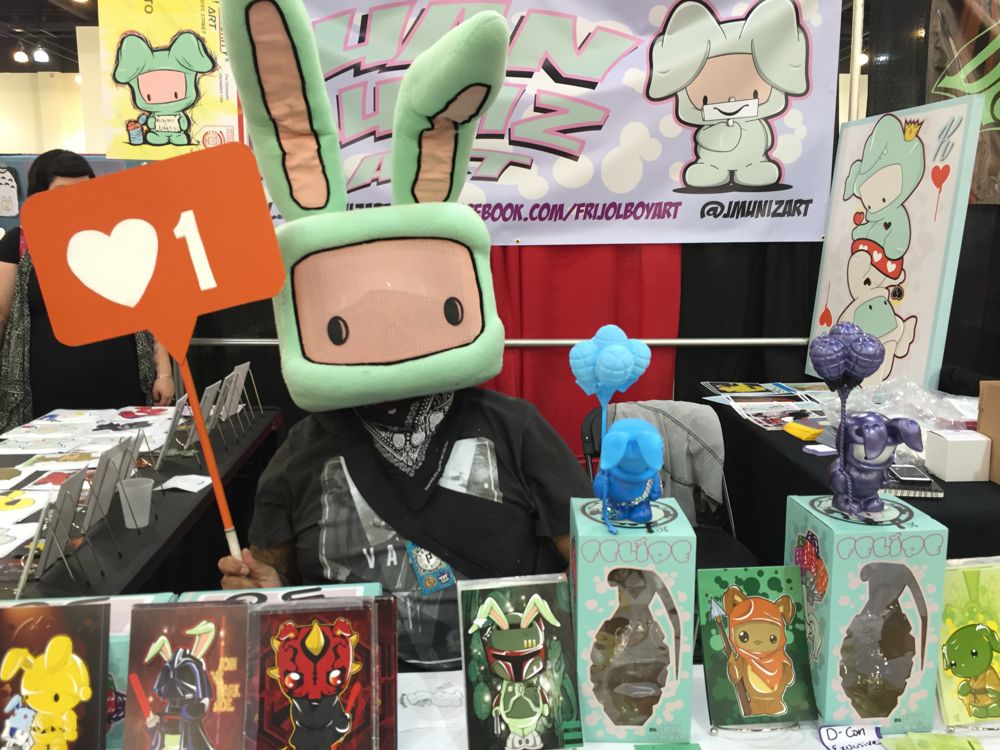 Juan Muniz is a painter from Las Vegas who works with a character named Felipe, a bunny with a TV-shaped head. Muniz was introduced to toy production through his friend and fellow painter Luke Chueh, who is known for designer toy world hits like “Possessed.”

Muniz’s first toy is based on his painting “Uh-Oh,” and features Felipe looking towards the ground as he holds a a cluster of grenades that resemble balloons. Muniz explained that the character is looking at the pin from a grenade. It’s pretty heavy imagery, but in the designer toy world, that doesn’t seem to be a problem. The first color way of Muniz’s Felipe figure sold out on preview night at San Diego Comic-Con earlier this year. Since then, a couple different versions of the toy have been released and there’s a glow-in-the-dark one on the horizon. For DesignerCon, he brought in two limited edition releases made as convention exclusives. One version of Felipe was painted gold and named for California Adventure ride Golden Zephyr, another in a metallic red that’s a tribute to hot rods.

“I just wanted something to hold, something that would be mine,” said Muniz. “Just to have a toy that’s mine, that’s real, that I can hold, it’s different from a painting or a mural or an illustration. I can actually play with this toy.”

5.  You Can Help a Friend Bring an Idea to Life. 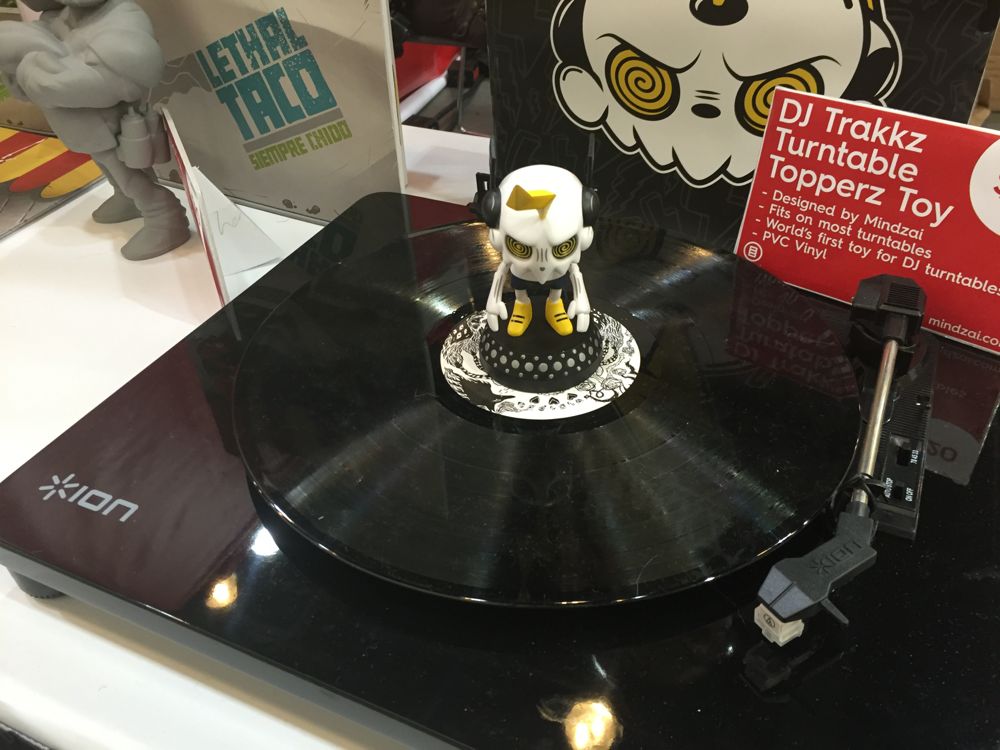 Mindzai made a toy that sits atop a turntable. (Photo: Liz Ohanesian)

Chris Tsang, who co-founded the Toronto-based company Mindzai, is a toy fan who started selling them, then making his own. At DesignerCon, Tsang and Mindzai showed off an unusual piece that sits on top of a turntable. His friend had approached him with the idea. Tsang wanted to make up a story for the figure, so he envisioned a DJ with “dizzy eyes” that keeps the party going all night. DJ Trakkz emerged from that collaboration.

The character, which was released a couple months ago, is the first in a series of party people ready to spin with your records. The turntable was stationary when I stopped by the booth, but I could imagine becoming hypnotized as I watch this little guy spin at 45 RPM alongside a 12″ dance remix.