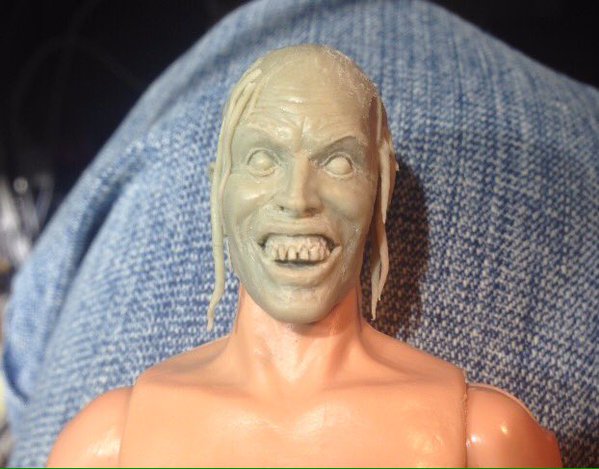 The second Texas Chainsaw Massacre film isn’t just the best in a series that mostly ignores continuity movie-to-movie, but it may just be the best damn slasher sequel period. A lot of that is due to Dennis Hopper being the protagonist, some of it’s in the way Leatherface blatantly uses his chainsaw like a penis…and a shit-ton of it is Bill Moseley as Chop Top, Leatherface’s combat-veteran older brother with a metal plate in his head and a coathanger to scratch it with. Since Leatherface never really talks, it’s up to his bro to be the mouthpiece, and boy, is he ever…

Chop Top has been done as a figure before by Mezco, but this will be his first appearance in NECA’s Mego-ish retro-style, a format using generic bodies that allows for less lucrative licenses to be affordable, and which delivers cloth costumes, and by the looks of it a removable wig.

It’s a shame the various sequels and reboots never brought Choppy back – but Michael Keaton’s Beetlejuice performance, released two years later, does appear to have gotten some uncredited inspiration from our freaky friend.