Joe Keatinge has won a Harvey Award and an Eisner, and has developed a passionate fanbase from his work on books like Glory and Shutter (both excellent, if I may editorialize for a moment and I can because this is MY column). He’s also, like many of us, a big fan of the pro wrestling, and Ringside, his comic with art partner and comics newcomer Nick Barber, released its first issue last month (spoilers: I liked it a ton), and its second issue comes out at the end of this month. Both were kind enough to talk with me about the book. Check it out, and click any of the pictures in this column for larger versions of Barber’s artwork.

Jim Dandeneau: How did the idea for Ringside come about? You’re obviously fans of wrestling. 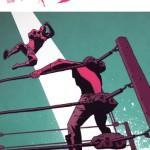 Nick Barber: It’s something Joe came up with initially, and together we sort of developed it into what it is now. We’re both fans of wrestling, but it’s not a project that came out of fandom – it’s our own story, our own fictional world so there aren’t any famous wrestlers in this or anything.

Joe Keatinge: As Nick mentioned, while we are both fans of professional wrestling, character and story came first.

When I first conceived Ringside, I was going through a lot of thinking about the future in a way I hadn’t before. Where I was going next, what I needed to do to get there – that kind of thing. It opened up the central thesis of our series, how far are you willing to go for the things you believe in?

It doesn’t matter what you do – whether you’re a wrestler, writer, painter, doctor, race car driver, construction worker, whatever – every single day you’re confronted with new issues, obstacles, successes and failures which can either help or hurt what you’re striving towards. The women and men behind professional wrestling have long big major inspirations to this degree. Mick Foley, who by all indications is an amazing family man, regularly put his all into his craft, being responsible for some of the most memorable matches the art forms ever seen. Or look at someone like Edge, who grew up loving wrestling, put his all into it, achieved great things and was one day told if he kept up the pursuit, his neck would essentially fall apart. I look at local promotions like Portland’s own DOA Wrestling and I’m constantly inspired by how hard they all work, the brutal lengths they go through; it’s no different performing in an Eagle’s Hall than it would be Madison Square Garden.

That level of sacrifice and determination is incredible to behold and I hope to reflect it well within Ringside.

JD: How did the collaboration happen? I saw that you mention on your tumblr, Joe, that Nick was “the missing piece” on the book.

JK: That’s the gist of it, yeah. I conceived it in late 2009. Pitched it to Image, Skybound, Dark Horse, Oni Press and Vertigo. While I was tweaking it a bit every single time, Mark Doyle at Vertigo was the first person to really get it and he inspired me to keep going. While they weren’t the right fit, soon after I met Nick through Tumblr or Twitter and he was the missing piece the series needed to succeed. Luckily, Image felt the same way and now we’re off.

NB: Joe found my art online and got in touch with me. This is my first professional comic book – so I guess Joe plucked me from obscurity. My art doesn’t really look like a lot of other stuff on the shelves, so I think that worked in my favour.

JD: The first issue is light on the squared circle, but it’s not light on the violence. How much of this is Dan’s story and how much of it is the story of a shady-ass wrestling world?

JK: It’s not so much about the wrestling world, “shady-ass” or otherwise, and more about how that world effects people, whether they’re a wrestler, creative, suit, music composer, shirt bootlegger, fan, etc. At first, it’s primarily the story of someone who’s no longer involved in said world, but is permanently affected by it, possibly to a detrimental degree.

NB: It’s the story of several people involved in and around the world of wrestling and how that affects their lives. As far as Dan’s story goes it’s the anti-‘Rocky’, he was the champ but he’s trying to get away from that life now and move on. Reynolds is an up-and-comer so we’ll most likely see more wrestling in his storyline. It’s definitely not a comic about wrestling matches. It’s about what happens outside the ring.

JD: How much bigger is the cast going to get? I’ve seen it compared to The Wire, which is like, unmanageably X-Men sized in the middle, but it seems like you’ve got at least 5 or 6 stories to tell based on who shows up in the first issue.

NB: The first issue introduces the characters for the initial story arc – beyond that it would be a question only Joe knows the answer to. It’s not an enormous cast, but it is an ensemble – so the storylines weave through all of the characters.

JK: We’ve got a lot of ground to cover.

JD: What aspects of the wrestling world are you most…eager (I guess excited isn’t necessarily the right word) to show?

NB: It’s more about telling the story of these characters, it’s not an expose on the state of wrestling today or anything like that. The thing which interested me the most in this project was looking at the lives of people involved in wrestling (not exclusive to just the wrestlers themselves).

JD: Obviously you’re not shying away from the international aspect, but it’s only a background detail at this point. Any plans for a world tour for Dan and the rest of the group?

JK: To be continued…

NB: There’s certainly travel in this book, being on the road is a big part of wrestling. Geographically I’m not sure where Ringside will take the characters beyond the first arc. 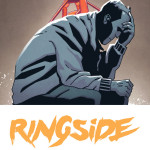 JD: For years, the in-ring stuff was as close as we were going to get to live-action superheroes. How much do you feel a draw to put more in ring stuff there?

JK: Absolutely none. It’s a book called Ringside, largely advertised as being about what is outside the ring. There are some fantastic comics which do the in-ring stuff well, like Jarrett Williams’ SuperProKO, but Ringside‘s focus is on how this one industry effects a lot of people, less so what goes on in-ring.

NB: I don’t feel a draw to do that at all. There are plenty of superhero books out there if that’s what you want to read – Ringside is more of a drama, part crime, part noir. There’s wrestling on TV multiple times a week too, so we’re not trying to do that – we’re doing our own thing. That’s why this book will appeal JUST as much to people who aren’t fans of wrestling as to those that are.

JD: Thanks for talking to me!

Ringside #1 went on sale from Image Comics on 11/25. Issue 2 will be out December 30th, and you can get your copy digitally via Comixology or at your friendly local comic shop.

And lest we forget – what are you picking up this week?