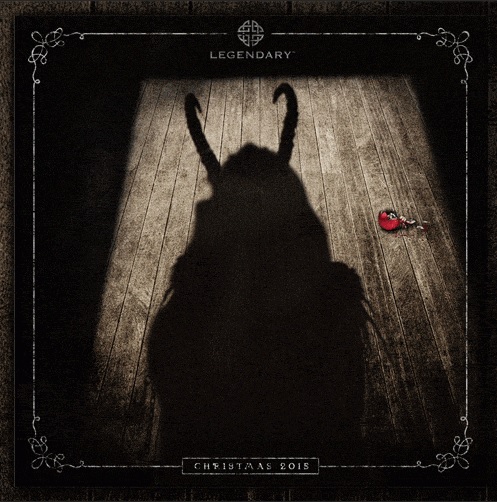 If, deep in your dark, dark soul, you truly despise Christmas – or at least Christmas the way many of us experience it – Krampus is the movie for you. Where director Michael Dougherty imbued his Halloween demon Sam with a sense of fun in Trick ‘r Treat, and the notion that he only wants you to play by the rules, his Krampus offers no safe outs. It’s as if the Whos down in Who-ville hired a Terminator to take out all potential Grinches before they’re even born. And nobody’s safe – the movie occasionally and annoyingly edits like crazy to keep from showing gore that would garner an R-rating, yet this is the first PG-13 film I can remember in forever in which children and even the family pet are fair game for deadly fates.

And that’s only the tip of the film’s gleeful hatefulness, which in a way is its most endearing feature. To understand just how much this movie does not give a fuck about flipping off the holiday, understand that it gives us an origin sequence which implies that Krampus is as powerful as he is because the bombed-out German civilians immediately following World War II weren’t optimistic enough. He doesn’t quite bring the Holocaust into it – characters following family Christmas traditions of any kind are less likely to be Jewish, after all – but it’s within spitting distance.

Dougherty’s approach to unfolding the story is fairly old-school – he doesn’t fully reveal his Krampus until the final act, leaving much of the dirty work to a handful of evil sidekicks inspired by the likes of Five Nights at Freddy’s, Robot Chicken and Shrek (Seth Green and Justin Roiland gamely provide some demonic cackles). Somewhat disappointingly, he barely touches on the rich mythology of the character, which is a particular shame given that our former contributor Chris Ward is a pal of the screenwriter, and could surely have made some suggestions. I mean, yeah, the evil Elves in wooden masks are cool to look at, but why are they like that? What exactly IS the jack-in-the-box with the vagina mouth? What’s with the snow globes? Whatever backstory was composed for this Krampus is mostly left to our guesswork, as he behaves like a conventional slasher villain.

For those keeping score, the only mention of Jesus Christ is as an expletive – Christmas in this movie is a time for shopping mall brawls, cops overly enjoying tasers, news anchors milking an imaginary War on Christmas, and kids dressed as a reindeer and a shepherd getting into a fistfight during the school holiday play. But don’t you dare actually get angry about the state of affairs, because then the Christmas demon will murder you and your entire family.

I don’t share the sentiment, but I am deeply amused by just how much of an actual Grinch Dougherty seems to be. His filmmaking could be a bit stronger, but his heart is bitterly, defiantly in the wrong place. As it should be. If you want your own to shrink two sizes this day, even for just two hours, your new holiday classic is here.

On the opposite end of the spectrum we have Moomins on the Riviera, based on the Tove Jansson books that I loved as a kid, and the franchise I only recently became aware it had become, particularly in Japan. Hippo-like humanoid characters from a fictionalized valley in Finnland, the Moomins inhabit a world of gentle souls and subtle melancholy – as an adult, one finds it clear that author Jansson was sliding more and more into depression as the series continued, with the final book not even featuring the main characters at all; just others who wait  in futility for them to show up.

In its opening sequence, the new film captures the haunting beauty of the Moominvalley of the books very well, with far more appropriate music than that annoying “ba ba ba ba, ba ba ba ba” earworm of the animated series. But once the family heads to the French Riviera, there is no melancholy to be had – just cute humor and comedy of misunderstandings. It’s hard to know if it’s meant for fans or newcomers – without explanation, for instance, a viewer might assume that young lovers Moomin and Snork Maiden are incestuously inclined siblings (they aren’t). However, longtime readers may wonder why Little My’s entrance into the story is completely retconned, and why Sniff is replaced early on in the story with his surprise cousin for the sake of a weird laugh.

The characters are controlled by the Jansson estate, so they do stay true to themselves, and assuming you’re okay with all of them sounding like Martin Freeman, that’s not a problem. But when an original creation becomes an estate-managed franchise, something is lost – the author was willing to take creative chances with her characters in a way those who merely safeguard them can’t. Part of the power of the Moomin book series is in the fact that it does end, and the way that it ends: early books feature massive disasters like a flood and comet, while the last ones just seem to slowly fade to gray, like time gradually catching up.

A story like Moomins on the Riviera strives to be more timeless, and for kids who just want more Moomin tales, it’ll do just fine. Grown-ups looking for a recapturing of the pure experience we remember are in danger of becoming like Fillyjonk, waiting around nervously for a metaphorical Godot that may never come.