Welcome to another edition of Robotic Gaming Monthly, TRV’s latest look into what’s been happening recently in the world of video games! And yes, CONTEST TIME!! We will be giving away three copies of the Talos Principle: Deluxe Edition for the Playstation 4 here!! We’ll get to that, but first, let’s just skip straight to the most important announcement of the last month…

…Get to funding it. *cocks shotgun* NOW.

Yes, I know we already mentioned this last week. But dammit, I have been waiting ten years for this sequel, and no way will I be denied it. I know some of you are wary after the controversies surrounding the Broken Age Kickstarter campaign (although no one ever seems to mention their controversy-free Massive Chalice campaign that went off fine), but when Tim Schafer tried to get a sequel funded back around 2011, the big gaming companies apparently told him that they weren’t looking for anything creative. Yes, seriously. So if you won’t do this for Double Fine or the Psychonauts franchise, at least chip in a buck or two to help send a message to those in the industry who apparently think that we don’t need creative games anymore.

Moving on, one of the annoyances I do have in writing this column is that I tend to abort a few editorials/ramblings I have in mind, usually either because I end up rethinking them, or because of time issues. But thankfully, sometimes a new development pops up that allows me to revisit my old ideas. So let me take you back to the magic age of four months ago, when Bulimia.com posted an article depicting female video game characters with the proportions of the average American woman, addressing the issue of women represented more accurately in video games and female gamers having better role models.

This is indeed an important issues to address, and I applaud Bulimia.com for being concerned about it…which is why it’s a shame that I thought the overall article was..well, piss-poor.

Why, you may ask? Well, let me list a few issues I have with it…

So yes, while I wholly support highlighting more realistic female characters in video games, this is definitely not the way to go about it. It just feels lazily put together, like no real research was done and that the writer just stretched out the first ten images of female game characters they could find in Photoshop. I even showed the article to TRV’s own Julia Thompson, who didn’t like it as well (also saying she’s not offended by characters such as these because she knows these women are fake), and agreed that women in these occupations wouldn’t have bodies like these.

So where am I going with this? Well, as I learned last month, Ninja Theory showed us the right way to depict realistic women in video games.

(WARNING: Video contains glimpses of bare nipples.) That is Ninja Theory showing off how they crafted their main character for their upcoming game, Hellblade. Note the actual research being done, how they looked into what type of body a warrior like their character might have, how they scanned every inch of an actual, real-life woman and took it all into account. That is how you strike a blow for the representation of women in a video game. So Ninja Theory, I salute you for your incredible efforts in this area. Now all you need to do is make sure the game is great as well… 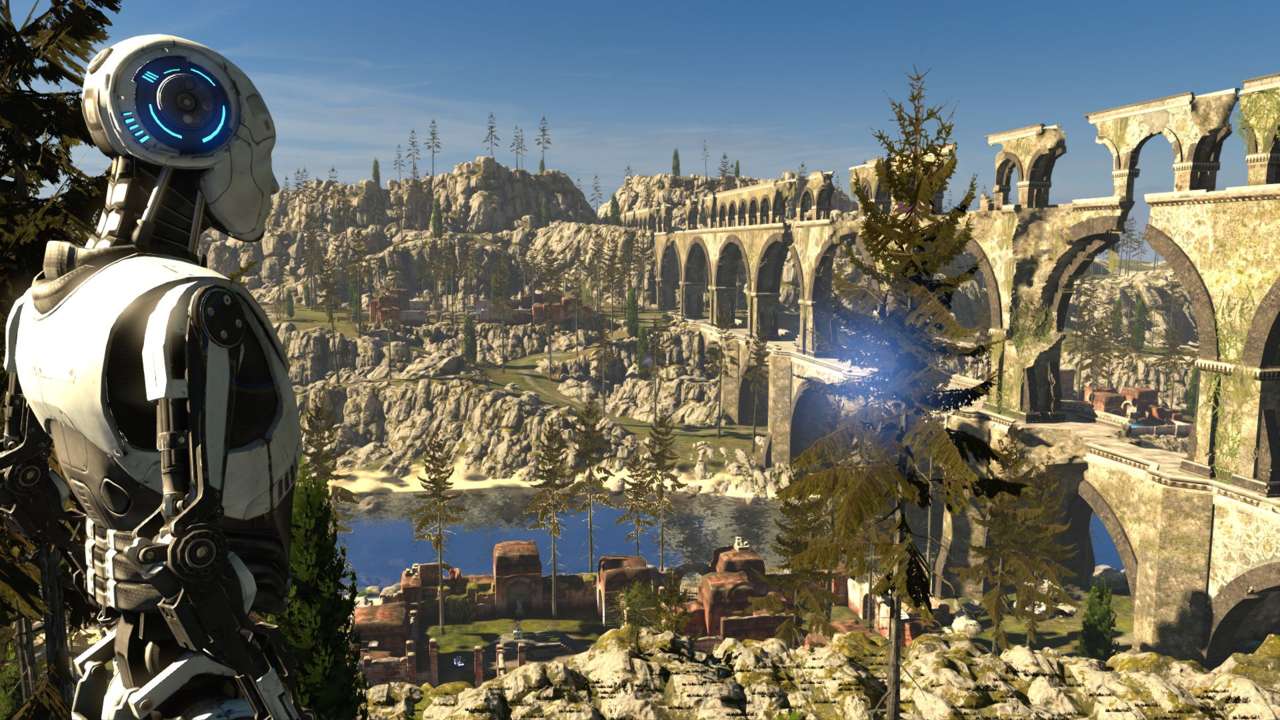 Okay, contest time! This is a big one for us, because we have three copies of The Talos Principle: Deluxe Edition for the Playstation 4 to give away (sorry, we just have it for PS4)! Physical copies at that. This comes packed with both The Talos Principle (which was one of my picks for 2014’s best games, by the way), and this year’s acclaimed Road to Gehenna expansion! It truly is an amazing, brilliant puzzler, I can’t stress this enough.

So how do you win a copy? Well, this is a game published by Devolver Digital, currently my favorite video game publisher active at the moment (as I’ve said before), because of their constant output and love for creative video games and original IPs. So in honor of them, their business model, Croteam, and The Talos Principe, I have decided to finally use my dream contest, one that I have always wanted to hold and will hopefully be able to hold again later.

So what do you have to do for this contest, you may ask? Simple…

Pitch me a video game idea.

That’s it. Just pitch your dream game. One rule, though: Your game can’t be based on any licensed material. Yep, it’s gotta be an original thought. Create an original, Devolver-worthy game, and you win one of Devolver’s finest. Simple as that.

Post your entries in the comments below, and enter as many times as you’d like. The contest ends a week from now at 3:00 PM EST on December 15th, after which the winner will be announced here, so get cracking. And make it good, I really want to see some creativity from you folks! Make TRV proud!

Oh, and the winner of last month’s Burning Question? David Oxford, who has been on a roll. David, we have your info on file, so we’ll contact you. The rest of you, get to work and beat David already!

Next up, time for reviews! And yes, it is now time to finally tackle that massive RPG released last month, the phenomenon that’s sold millions of copies so far, the one where you spend countless hours exploring a land filled with strange oddities…you know what I’m talking about! All up next!

I'm Kyle LeClair, AKA "SlyDante." I'm a freelance writer for Topless Robot, I love video games, and when I stop being lazy, maybe I'll finish the rest of this profile.