Menu
Home
>
Columns
>
BACKLOG.TXT – Styx: Shards of Darkness, Fantasy Through the Eyes of the Other 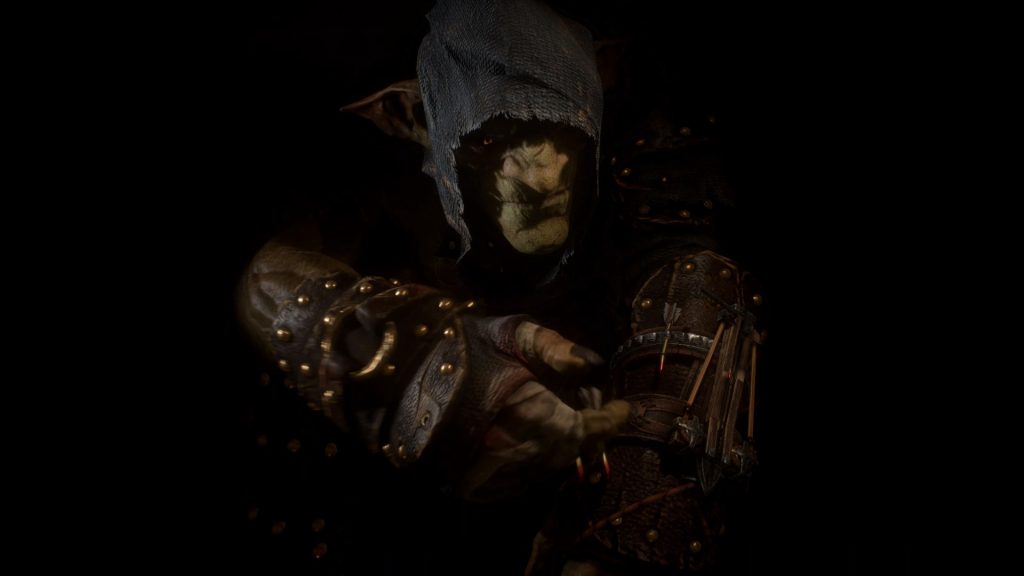 Today we give you a glimpse of Styx: Shards of Darkness, a 2017 stealth-action platformer from Cyanide Studios. Shards is the third game in the Styx series, and it once again sticks players right into the green skin of a foul-mouthed master goblin thief. Prefer to watch? Check out the episode of Backlog Quest on the 2 Headed Hero YouTube channel!

Styx, a uniquely intelligent member of the goblin race (also known by the derogatory term “rakash” throughout the game’s lore) was introduced in the 2012 RPG title Of Orcs and Men. In the series’ initial entry, players fight the oppression of the human empire, initially taking control of the Orc warrior Arkail while soon gaining the ability to swap to the wisecracking goblin assassin at will. 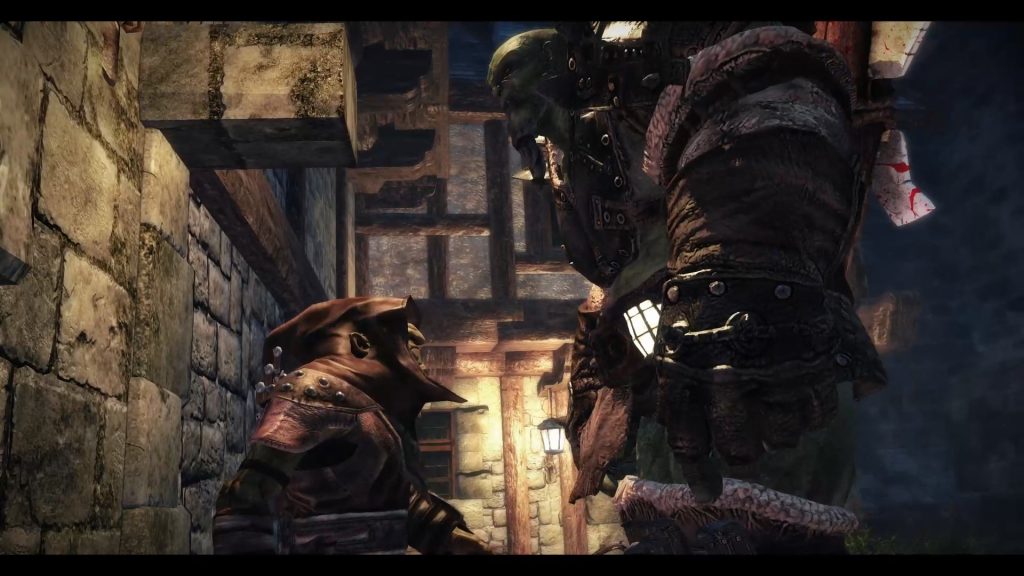 Of Orcs and Men was a short but fairly entertaining romp that turned traditional fantasy tropes on their heads.

This small but important piece of world building is what sets the Of Orcs and Men series apart. Ditching traditional, tired fantasy tropes allows players to see the other side of the coin – and Cyanide was not shy about adding a healthy amount of attitude and humor. It is a fairly refreshing hook, and entertaining throughout the span of each game in the series. The mouthy goblin Styx remained popular enough for Cyanide to double down on two prequels: 2014’s Styx: Master of Shadows, and today’s subject, 2017’s Styx: Shards of Darkness.

Contrasting Of Orcs and Men’s tactical pause-combat gameplay, Master of Shadows and Shards of Darkness are much more action-oriented. Both prequels allow you to take direct control of the greedy green menace himself as you sneak, climb, steal, and shank your way through expansive levels.

Getting Up Close and Personal With a Greedy Green Menace 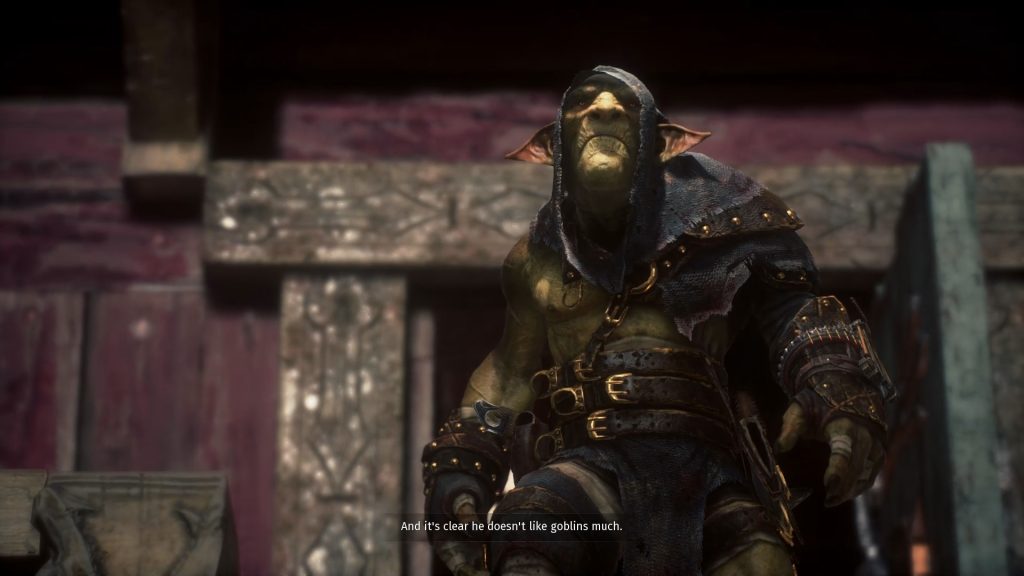 A goblin has never looked so good.

Styx: Shards of Darkness looks rather nice, from the softness of torchlight to the pores on our antihero’s prominent green snoot. Even considering that this was a budget title – $40 at release – the Unreal 4 engine shows some beauty. There are the occasional movement animation bugs here and there – the most glaring of these appearing during a boss stage. Still, the enemy attack and death animations are brutal and sublime. Styx himself is animated quite well and moves with fluidity throughout most of his maneuvers, but the overall effect is slightly B-movie compared to the quality of an Uncharted or Assassin’s Creed. 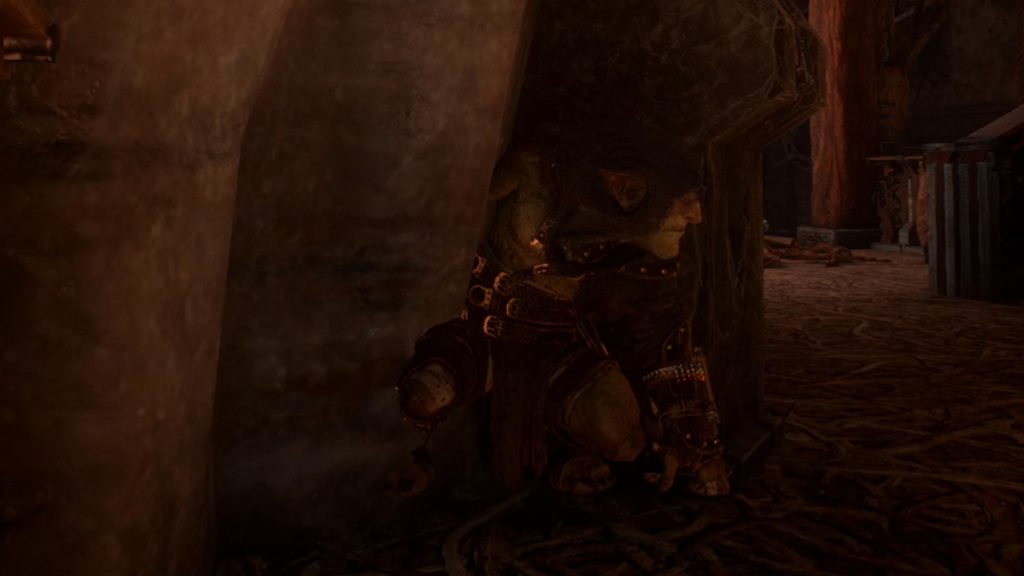 Here, we see the Master of Shadows truly blending into the terrain. Other than the occasional geometry issue in some of the far reaches of the levels, the game’s grimy, grim high-fantasy look and style is attractive, cohesive and immersive.

The soundtrack in Shards, while not groundbreaking, fits this fantasy world fairly well, and there’s a couple good toe tapping tunes found in the taverns. Sound design was also generally  effective, but enemy footstep sounds in particular seemed sort of loud, repetitive, and out of place in the mix.

There is a ton of voice acting in Styx: Shards of Darkness, most of it pretty good. Styx definitely stands out as the star with frequent jokes and clever writing. Many of the supporting voice actors and minor roles like guards are all over the place, though, and the lip syncing often seems kind of… strange. Mouths move unnaturally and stiffly fairly often, giving the game’s characters somewhat of a Muppet-like quality. This change can be jarring, as the rest of the animation is fairly well done.

Getting Into the Gritty of the Gameplay

Styx: Shards of Darkness is a fairly difficult and unforgiving game that strikes a balance somewhere between old guard stealth games and the newer stealth-action hybrids.

The game has many modern mechanics, such as an enhanced vision mode that highlights interactables and enemy sight cones. Alertness indicators hover above Styx’s foes. Objectives are (usually) marked. These additions help break down the barriers of Shards’ rather sharp learning curve, and there’s also a significant amount of parkour-style climbing that brings to mind newer stealth entries like the Assassin’s Creed series. 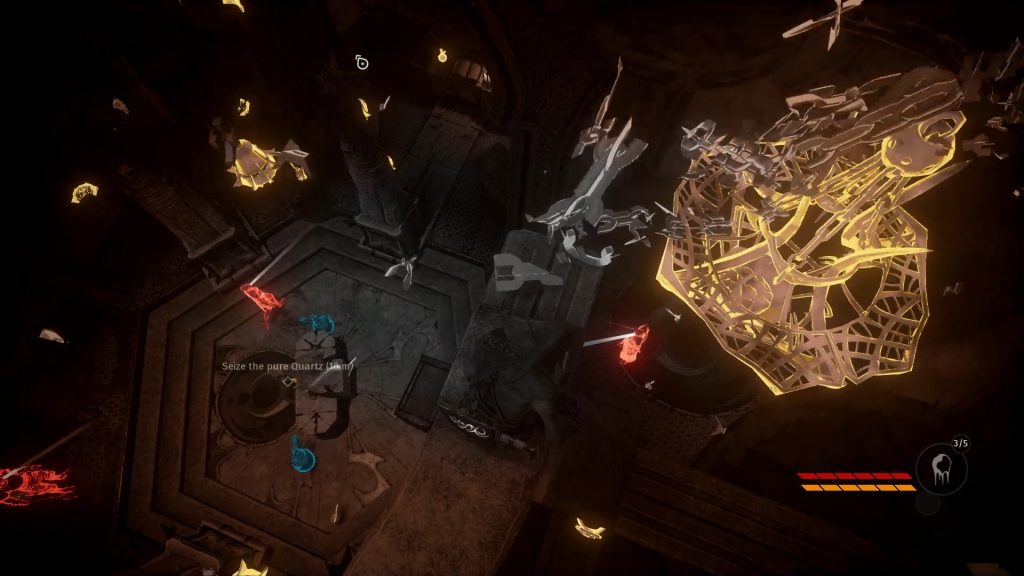 Use your cheater– uhh, amber vision to detect threats. Then, collapse chandeliers on your foes for wonderful cartoony, yet murderous, hijinx!

On the other hand, Styx: Shards of Darkness gives the player little direction and multiple paths to victory, while loading up the large level environments with resources, secrets, collectables, and even hidden objectives. This reminded me of treasured memories from the original Thief franchise. (Let me be clear – I’m talking about the excellent series developed by Looking Glass that ran 1998-2004. That Thief 2014 abomination can pack up and get out). 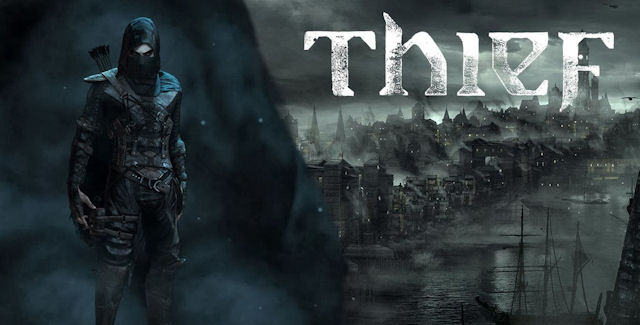 More time was spent in Styx: Shards of Darkness searching the big beautiful levels for secrets and finding vistas and views than I care to admit.

Styx himself has a sizable toolbox of abilities and magic to work from, and most notable among these are his invisibility magic, and his ability to barf out a controllable clone. Even with all these options and an impressive skill tree to improve them, players might have a hard time getting over Shards‘ initial difficulty curve. The somewhat lackluster boss fights also almost completely forgo stealth. These encounters are more similar to muddled puzzles – and a rather weak point in an otherwise strong gameplay loop. 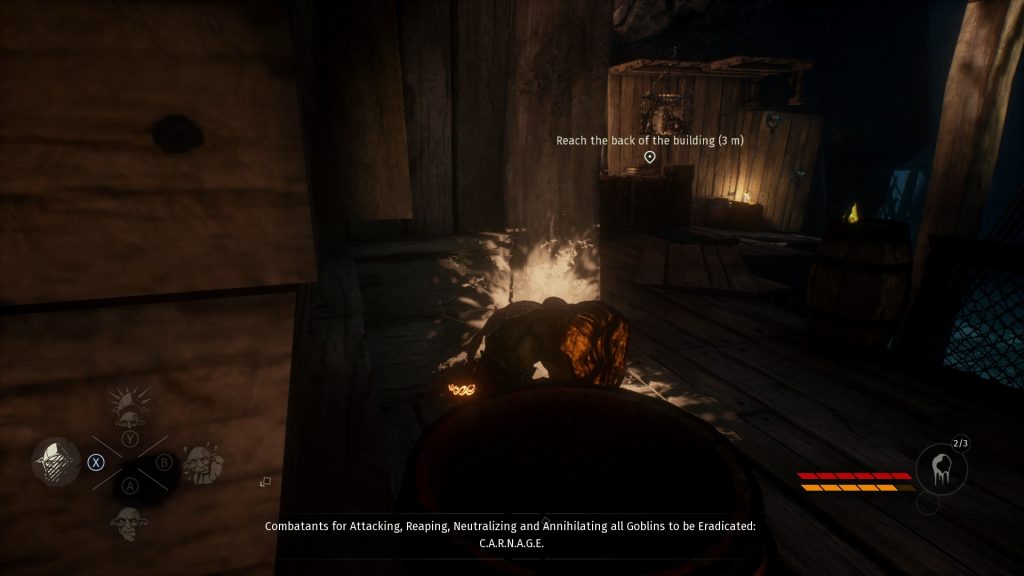 “Maybe next time, I’ll try pooping one out.”

Snuffing a torch, sneaking up behind an unaware guard, and letting loose with a brutal flurry feels really weighty and satisfying in Styx: Shards of Darkness. Most enemies can be offed with a single well-placed backstab, but Styx is also quite fragile and escapes are very difficult to pull off once spotted. This means you’re going to be seeing a lot of game-over cinematics while you learn. 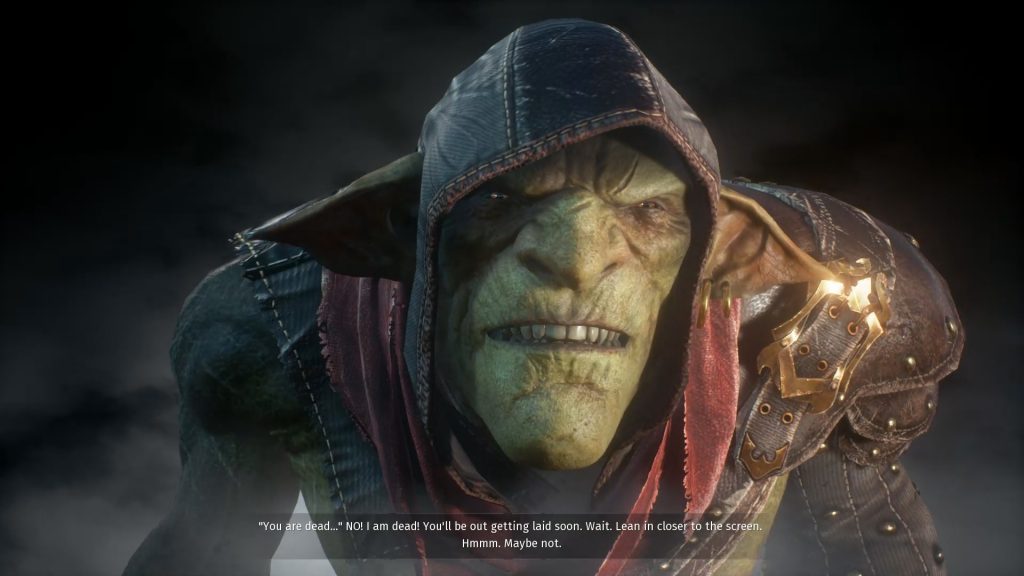 Thankfully, you can turn these off if they bruise your ego.

The inclusion of a drop-in cooperative mode sounds great – in theory. 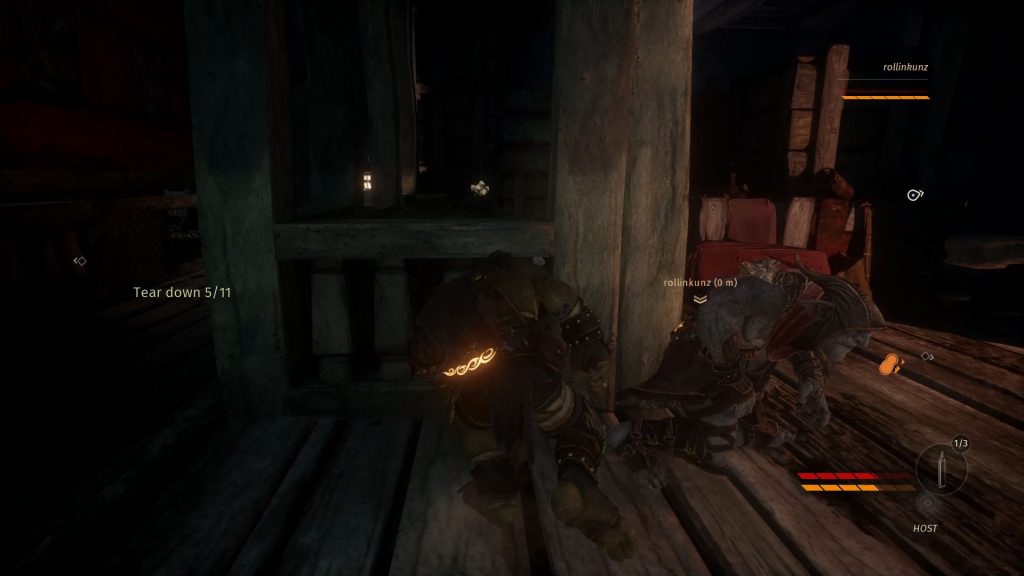 In practice, coop can actually compound the frustration. Hell is other people, after all.

Even though coop means there’s now two green troublemakers running around, resources don’t double in kind. The difficulty also bumps considerably, as the dual rakash running around lose the ability to parry incoming sword swings. There’s effectively also twice as much potential for guards to detect you, ending the game in disastrous – or hilarious – failure. Tight coordination and split-second timing are the keys to coop survival within the challenging environments Shards contains.

The most glaring flaw in Styx: Shards of Darkness has to be the parkour – it’s just not as tight or polished as some of the game’s contemporaries. On the whole, ledge grabs and shimmying up ropes was passable, rope swinging and wall vaulting was only slightly more problematic or wonky. 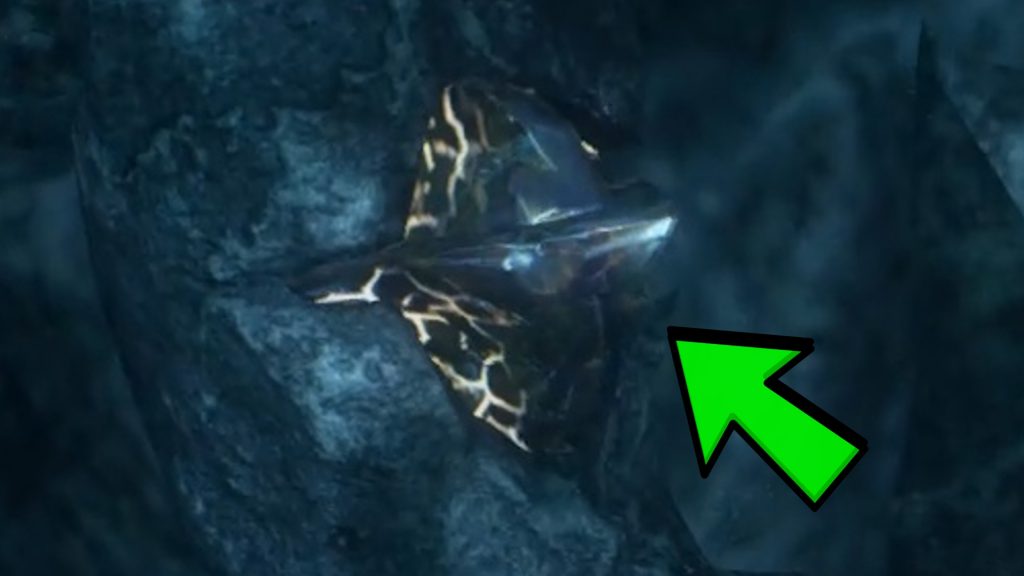 Despite its flaws, I had a good enough time with Styx: Shards of Darkness to see Styx’s story through to the end. The premise of playing fantasy tropes from the other side of the coin drew me in, the overall production value was fairly high, and Styx himself bucks hero tropes left and right. Series veterans will also see many tie-ins to previous characters and events, providing many nice Easter eggs for fans of the lore.

Half of the game’s fun was sneaking through the alleys to shank a self-righteous human, boot a bloodthirsty elf off of an embankment, or drop a chandelier on a drunken dwarf. The other half was watching Styx react to the world as he playfully insults the realm’s inhabitants, pokes fun at competing stealth games, and breaks the 4th wall to taunt the player. 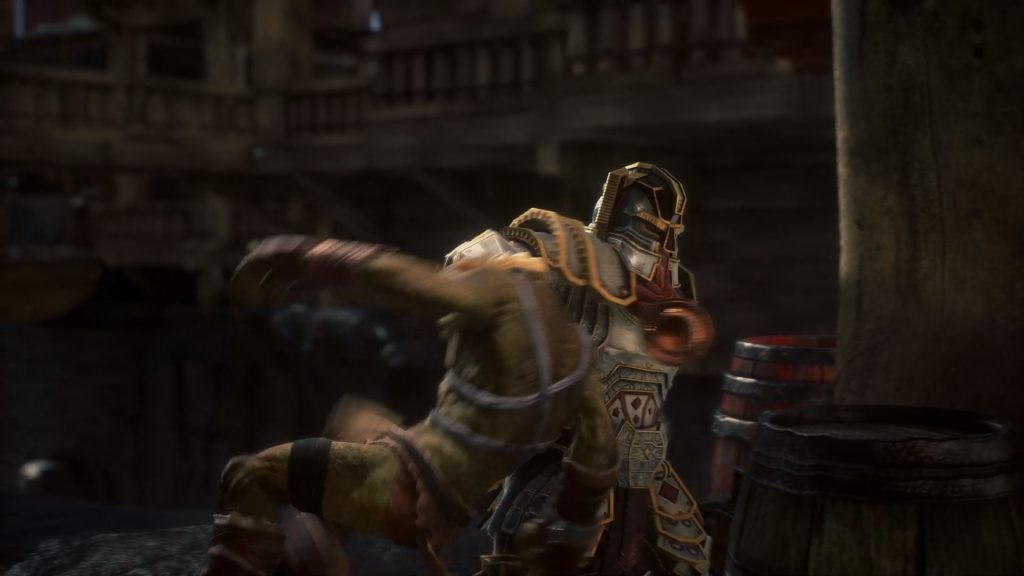 A common example of a Shards of Darkness Dwarf: Drunken, disgusting, disdainful and destructive. 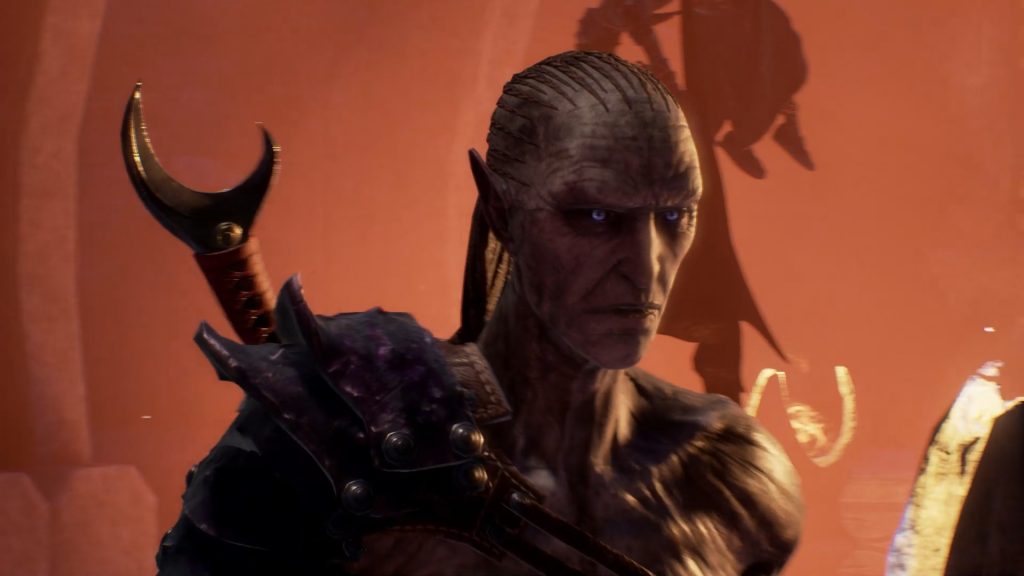 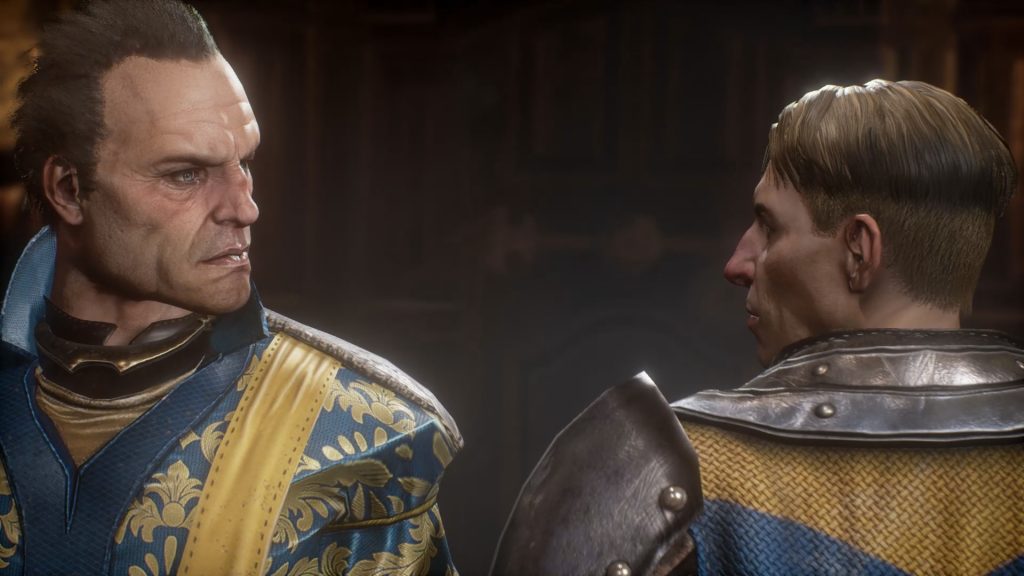 Humans: entirely arrogant by nature, fickle by design, and always worthy of a shank in the spine.

A Good Exercise in Gutter Justice

Styx: Shards of Darkness is great visceral fun when the game’s at its best. While Shards often caused me to shake my skull in frustration, overall I give this game a joyous bow of my brain box to stealth fans that love exploring and want a challenge. 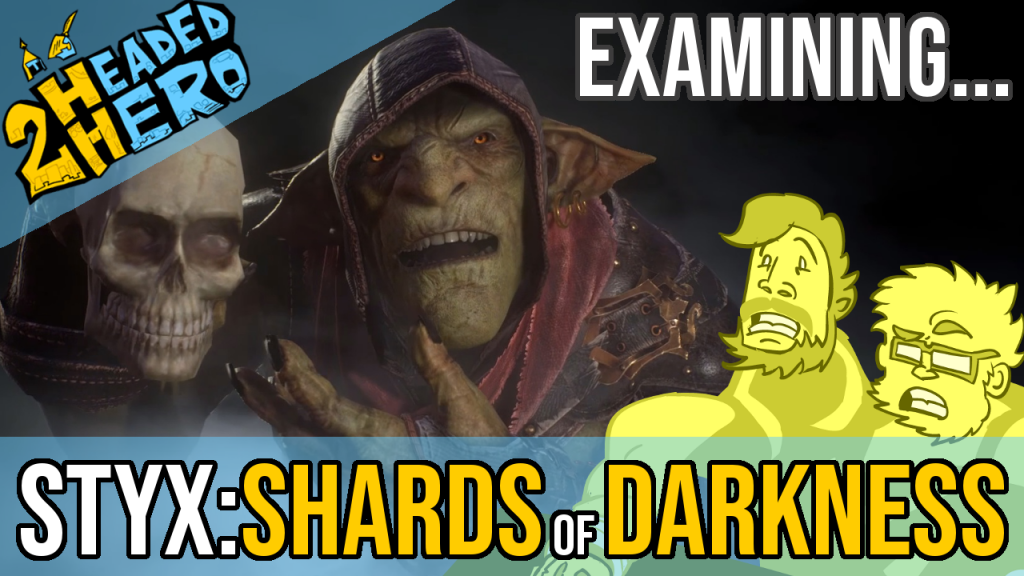 Check out the animated examination of Styx – Shards of Darkness on 2 Headed Hero!