Prefer to watch rather than read? Click the video above – or check out the animated episode on 2 Headed Hero’s YouTube Channel. 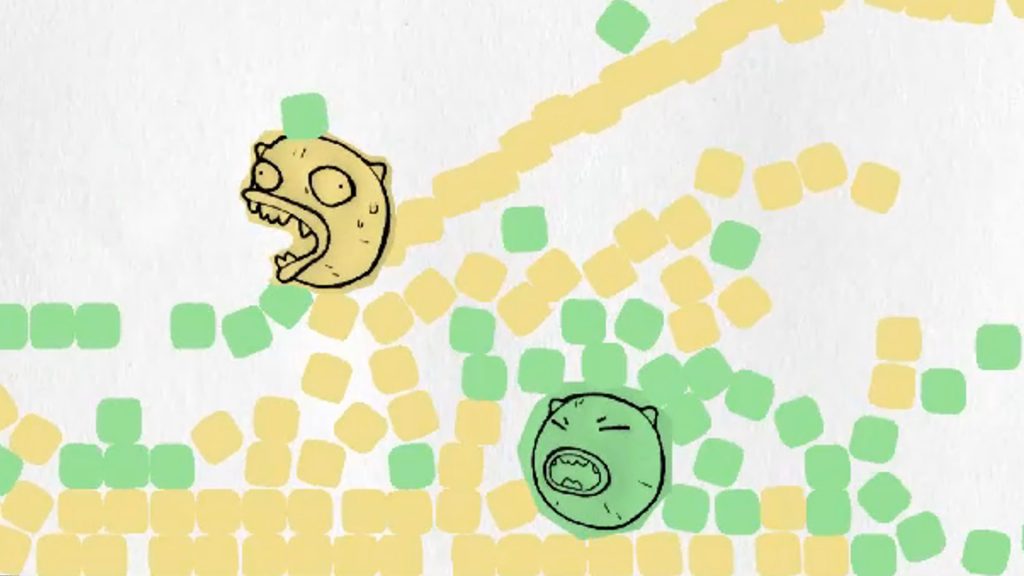 Block Pooper 9 came out on December 4, 2018 and flew under the radar. This bowel movement brawler is the brainchild of veteran indie development team Popcannibal. The early-access boat builder Make Sail, the dating puzzler Girls Like Robots, or the space exploration novelist game Elegy for a Dead World all fall under the umbrella of their recent endeavors. 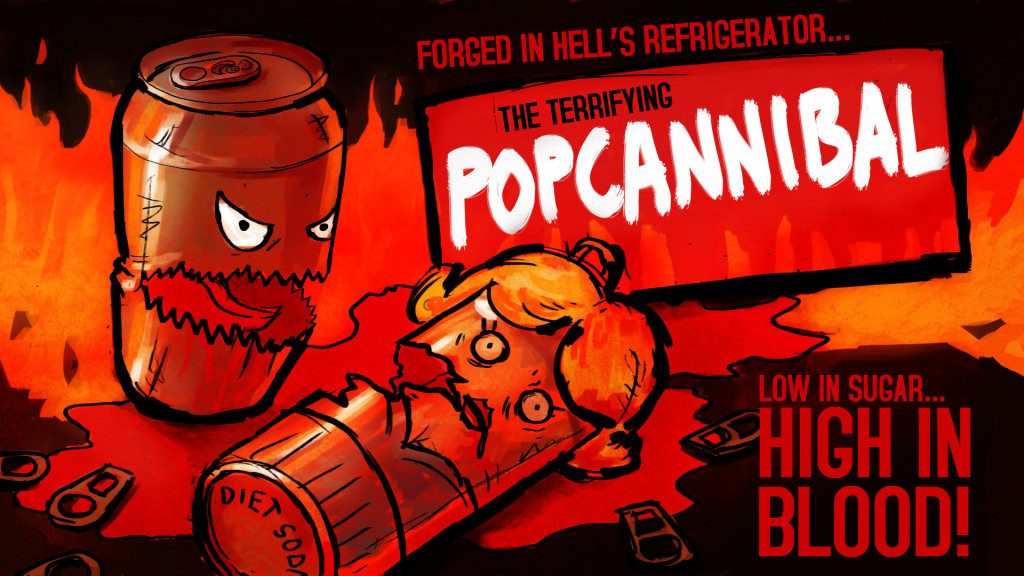 Headed by programmer Ziba Scott and joined by artist Luigi Guatieri, Popcannibal is known for a variety of strange, creative, and experimental titles.

Whatever Became of Block Pooper 1-Through-8?

While the fate of vaporware prequels Block Pooper 1-8 may be lost to history, Block Pooper 9 is a tiny and endearing multiplayer physics game with a silly concept. Players take control of weird block-pooping cat heads (or are they wombats?), facing off to see who can hit the high score and bury their opponents under a deluge of diamond-shaped dookies. 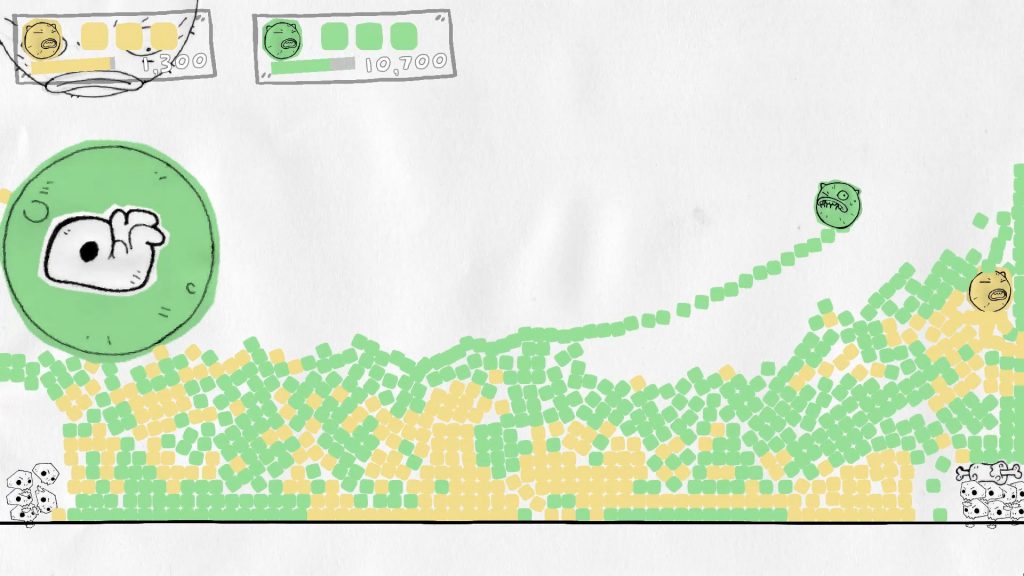 While basic, the look is cohesive, and it’s easy to read what’s happening during a match.

Visuals in Block Pooper 9 have a simple,scratchy pen-and-ink style.  Little details like the facial expression changes of the cat heads really help add to the silliness factor here. The interface is likewise simplistic, but allows you to see the status of your remaining cat heads, score, and how much, uh, “business”  is left in the chamber.

Audio design here is pretty minimal, with only a few subtle fart noises and impact queues. Even so, the solitary song in the soundtrack fits well and has a nice groove. The sound design of Block Pooper 9 all lends itself to a couch multiplayer atmosphere. With this in mind, it’s clear why the developers went for an understated direction. An intricate soundscape would be wasted on a group of loud players laughing while literally shooting the shit. 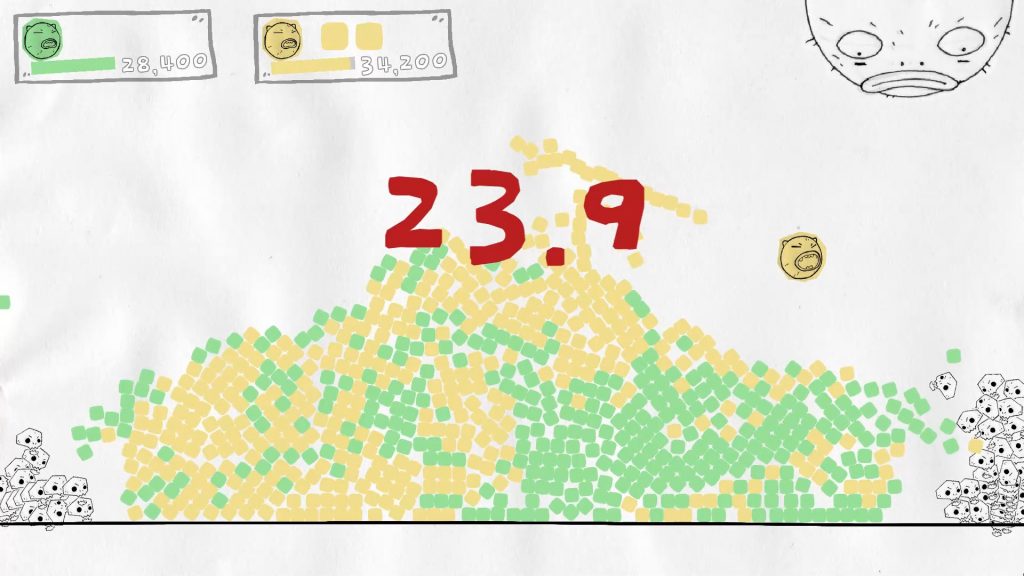 Playing Block Pooper 9 is simple enough to get a handle on, and the pregame options screen describes it succinctly. Poop blocks, avoid skulls, and protect the weird fetus heart. To win: do all these things better than everyone else.

Block Pooper 9 dumps players into a singular arena with one of two slightly different game modes. The cat heads are controlled sort of like a rocket ship, and are directed by spraying square waste in the opposite direction you wish to propel. Button two on the controller blasts a radial poop explosion, or can be directed sort of like a shotgun (shart-gun?) blast to send forth a directional cascade of butt blocks that buries opponents.

Points appear to be made in two ways: by feeding those pointy poop nuggets to the skulls that pop up from the level corners, or by snatching up the coveted hams that flop out of the terrifying sky-mouth. The hams are worth beau-coup points. This gives players something further to compete for as they diarrhea dance around the level.

Once the heart dies by getting bitten by too many skulls, the round ends, and the player with the most wins after 3, 5, or 10 rounds takes home the tournament trophy. Alternatively, if all other players exhaust their lives, the last player standing gets a 30 second timer. With enough skill, the last player can to try to take the high score and snatch victory for the current round.

What Is Up With This Weird Fetus Thing, Though, For Real? 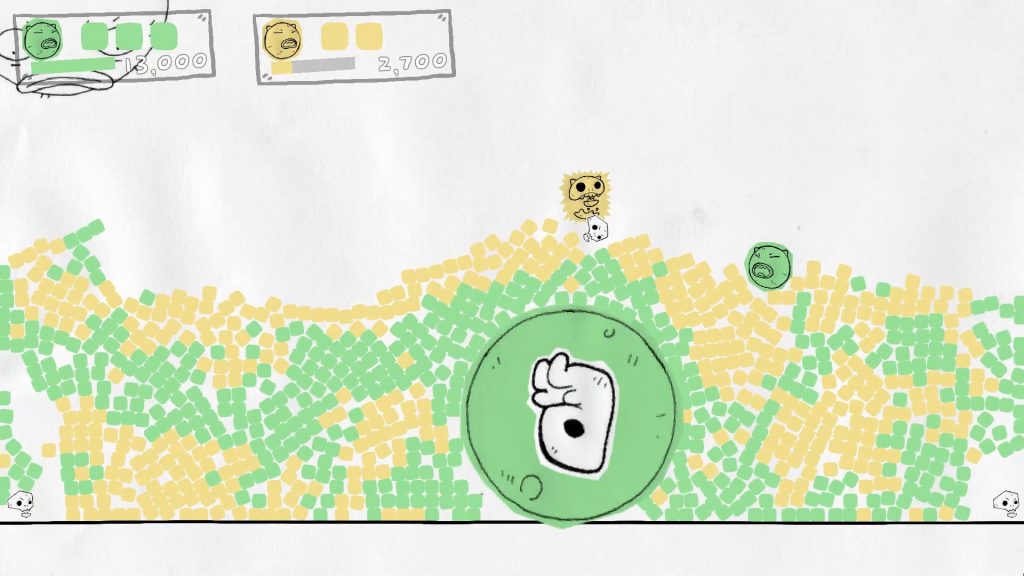 For REAL, though. What IS that thing?

The heart mechanic can also be turned off completely. This makes Block Pooper 9 into a fun bite-sized Battle Royale game.  This significantly changed the dynamic, switching the focus from competitive tower defense into an all-out waste war. 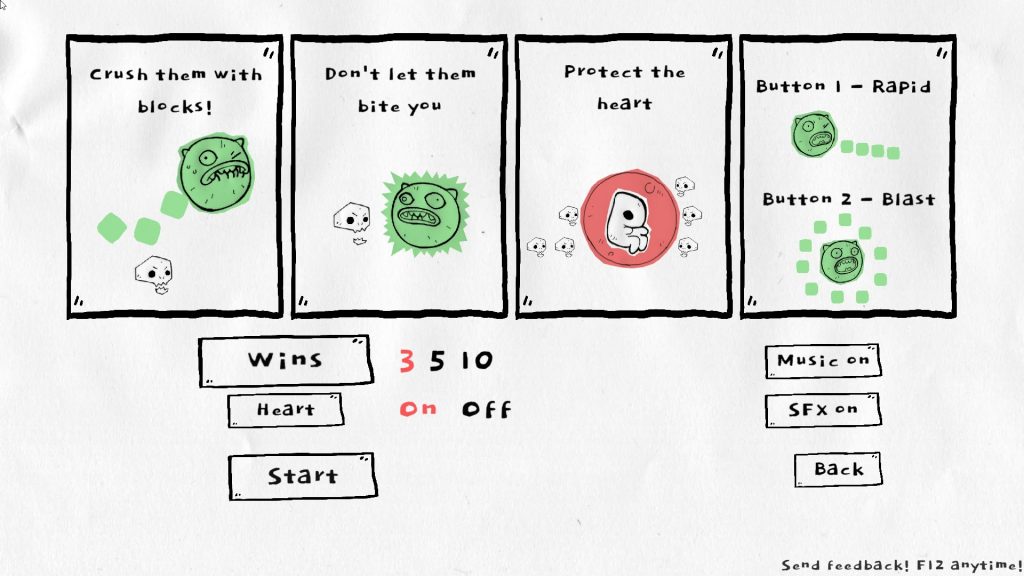 Turn off the heart for a simplistic Bowel Royale.

While Block Pooper 9 is a ton of fun, there’s a couple minor issues. One was performance. On occasion, the late game would suffer a bit of a slowdown due to spawning so many blocks and skulls. Still, this seems like something that could be tweaked.

Online play and some additional arenas would be welcome. It would also be nice to be able to choose player head colors at the beginning, rather than it being assigned. For Block Pooper 9’s asking price of zero dollars, these are more wishlist items than complaints.

Butt What Is The Final Verdict?

Overall, Block Pooper 9 is a great example of a lighthearted party game. While the concept is a bit juvenile, the game is hilarious proof that sixth grade humor and poop jokes never die. They just get made into games. Best of all, the title is completely free on Steam.

With a bunch of controllers and a few bored friends laying around, Block Pooper 9 is a good little game to fart around with.