Full disclosure: The game is currently in Early Access on Steam. We were sent review keys for this game. However, we were actually very pleased with how polished and compelling it was, even in Early Access. Prefer to watch? Check it out by clicking through above, or visit 2 Headed Hero on YouTube! 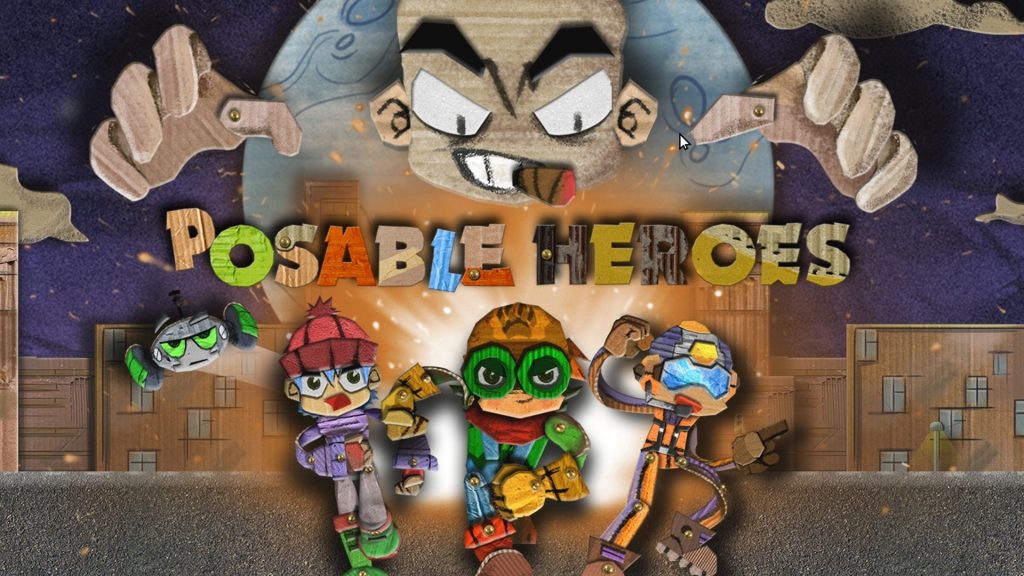 After putting in a healthy amount of hours (and in Rollin’s case, finishing the game in one long binge), we can agree on one thing. The Chilean development duo behind Posable Heroes, Stochastic Lints, has put forth an enjoyable example of an original idea. This unique indie puzzler combines concepts from frame animation with physics puzzle challenges. The game wraps it all up in a lighthearted superhero theme. 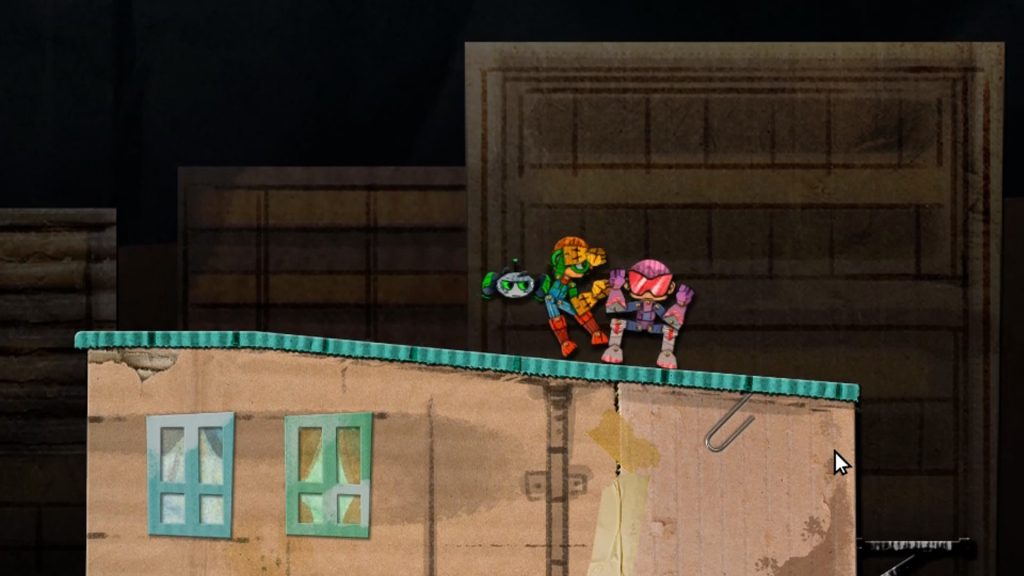 “Show me your passport for this roof, citizen!”

Posable Heroes tackles a unique and colorful visual style. The characters and level environments are all designed to look like cardboard cutouts, down to the brass pushpins in the joints of your intrepid hero. Backgrounds have marker, wallpaper, and colored pencil doodle qualities. All of this is very cohesive, and the overall look is warm and attractive. Visually, I found this a truly charming approach. It’s clear the game’s look likely aims for family-friendly appeal. 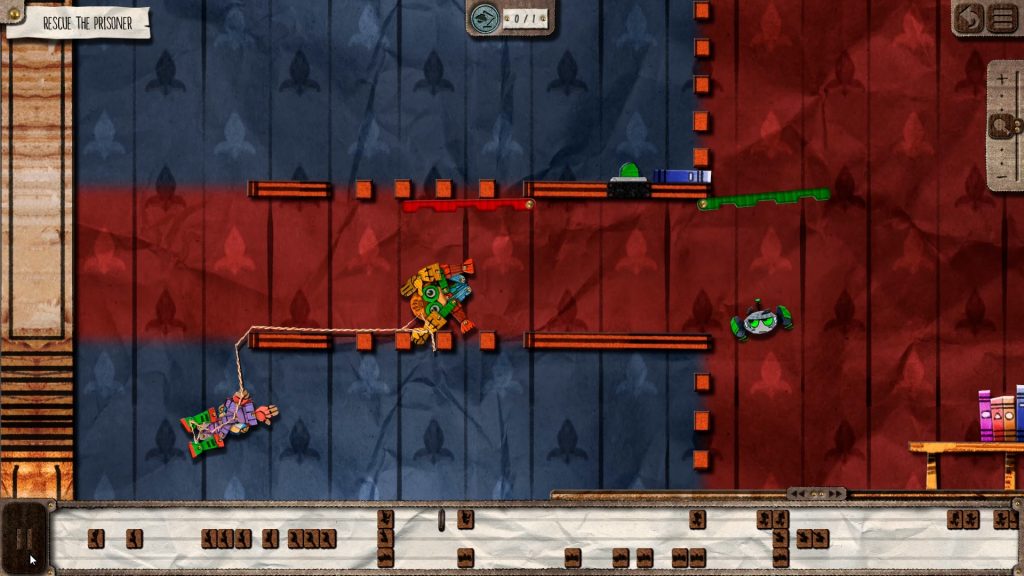 The sound design in Posable Heroes is a bit sparse – mainly consisting of user interface noises. Cute paper shuffles highlight the positioning of your superhero’s flexible limbs. The background music here is an interesting mix. Chilled-out synthesizer music feels just right for putting players in the mood to test their wits against the puzzles. Hilariously inappropriate epic film scores tend to back simpler levels. The game tells its story through comic book-style dialog bubbles rather than voice acting. I found this to be fine, since bad voice acting can take a lot away from a game’s enjoyment. Still, giving each of the characters their own speech noises might go a long way in making cut-scenes a little more palatable. 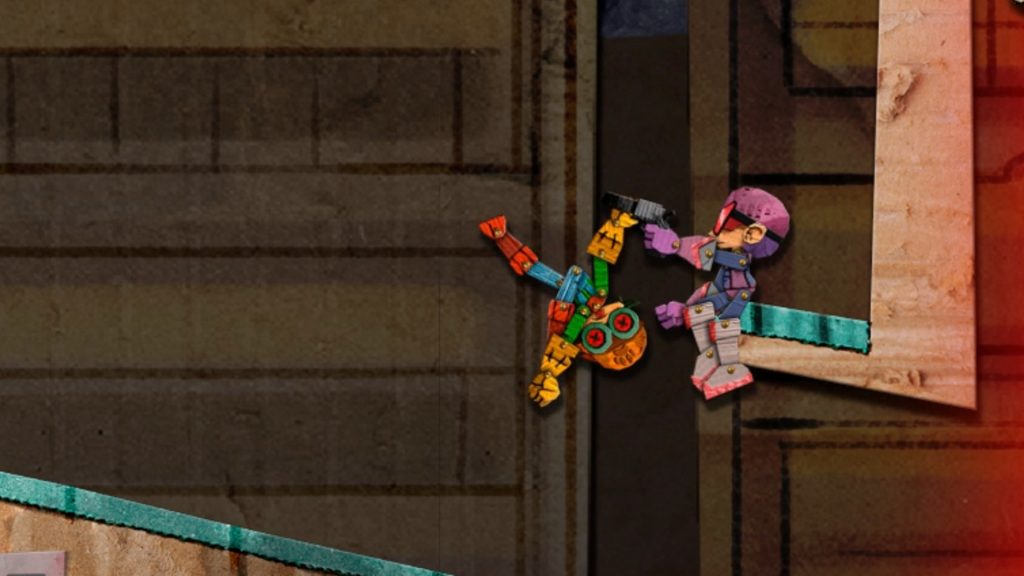 Not all heroes are created equal.

Eco-terrorism and Superheroes: An Interesting Mix

While the lead heroes have some questionable humor, the story elements are sparse. The real meat in Posable Heroes is, of course, the gameplay. Players create movement frames for their hero in order to propel them through obstacles and hazards. So what’s the catch? Well, the overall timeline is limited. The challenge then comes from posing your heroes in just the right ways, and at just the right times, to make an animation that solves the level before hitting the timeline’s end. 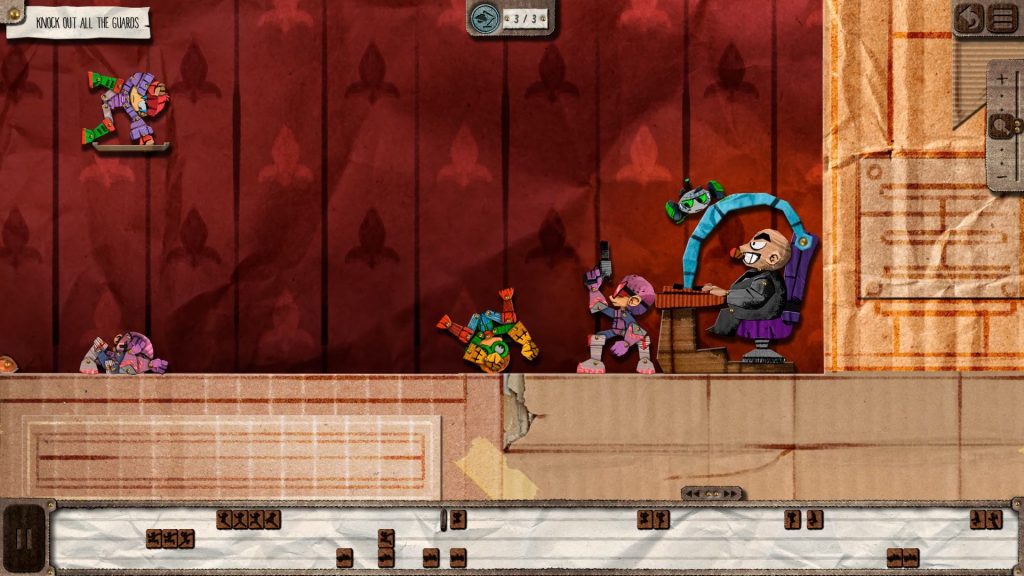 Posable Heroes‘ challenges begin simply, with your superhero navigating his way out of his orbital satellite. The difficulty – and hilarity –  quickly ramps up with successive levels. Your lone champion is tasked with leaping huge chasms and fighting armed henchmen. Further adding to the chaos are additional props, vehicles, robots, and even companions in later levels.

I must start out by admitting that I am not much of a puzzle gamer. Banging my head against a series of developer riddle boxes for several minutes (or hours) on end sounds more to me like a private hell than a relaxing evening. Posable Heroes also doesn’t entirely escape a few flaws. The writing feels about as flat as the cardboard characters. The sound effects are pretty spase and lackluster. The game could also use some stronger feedback when you knock out a guard, or impact a surface. Sometimes it’s hard to tell what’s happening to your paper avatar. 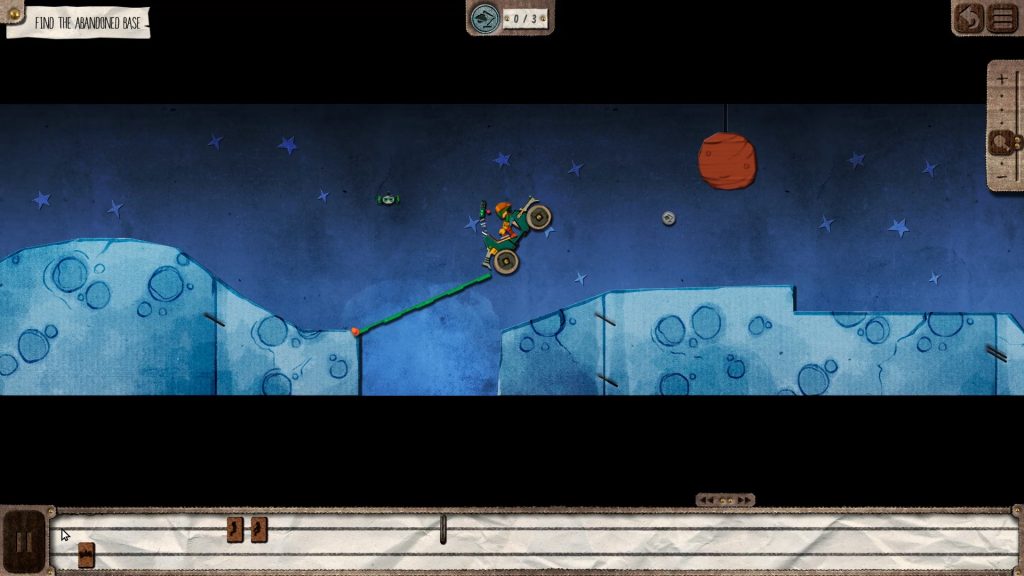 The game does a great job of adding props into the mix.

Really, the flaws I mentioned are minor nitpicks in a solid presentation. Posable Heroes is one of those rare niche creations with a surprising amount of fun. The final joyful result of watching a solved level play out like a short film made me burst into uncontrollable laughter more than once. Failures were equally spectacular. For me, being able to find fun even in losing is a hallmark of a good gaming experience.

Posable Heroes strikes a balance not many games achieve. It dares players to attempt what appears to be impossible at first glance, and at the same time allows enough leeway for some creative solutions. Although likely aimed at a younger audience, this game doesn’t shy away from difficulty. It’s clear Stochastic Lints has taken Nolan’s Law to heart here: Easy to learn, hard to master, and rewarding throughout. At the end of the day, Posable Heroes is a solid puzzler that I don’t mind banging my head against.