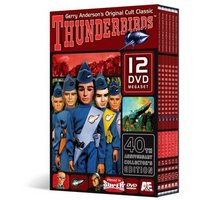 Is it another new weekly post? It is, by god! Every Tuesday, I’ll be profiling all the day’s DVD releases that nerds should possible care about. Happily, for “DVD Day’s” inaugural week, the offerings suck. Save your money for booze!

? Torchwood: The Complete First Season
Have you ever wished Dr. Who could be a little more bisexual? Then brother, have I got a show for you.

? Swamp Thing: The Series
The original USA series, to be exact. I recall watching back in 1990 that the show was a bit darker than the films, and nothing else, which means I’m probably repressing something about how terrible the show was.

? Confessions of a Superhero
I have no idea what this is, and can’t be bothered to sit through the site’s insanely long loading animation to find out. But by having “superhero” in the title, I figured I’d better mention it.

? Thunderbirds 40th Anniversary Megaset
100 bucks and 12 DVDs of nothing but wooden puppets talking strangely to each other. Are there people who have been holding out for this? Who need all 1664 minutes of puppet action? I both pity and fear them.

There’s also a great deal of soft-core pornography being released today via Amazon, apparently. I still recommend the booze, however.