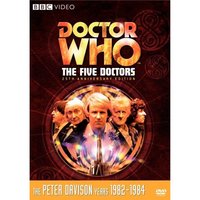 ? Doctor Who: The Five Doctors
The BBC celebrated Who‘s 20th anniversary with this special, which featured five of the doctors teaming up, making it pretty much a Who fan’s wet dream. This DVD continues the pleasure with deleted scenes and new effects in a 2-DVD special edition.

? Star Trek Season 2 Remastered
This is the version with the new CG Enterprise and effects, but just on regular DVD. I guarantee this thing will be coming to Blu-ray eventually, so you might want to wait.

? He-Man and the Masters of the Universe Vol. 3
The final 13-episode season with the Snake Men, Hordak and the awesome episode revealing King Grayskull and actual secrets of Castle Grayskull. Damn, I miss this show.

? Starship Troopers 3
Yes, there’s now a third, and it still “stars” Caspar Van Dien. More importantly, the original Starship Troopers?which is a hilarious movie, in true Verhoeven style?is now available on Blu-ray, as is this one. I find it bizarre that people think Starship Troopers was supposed to be taken at face value?although it’s clear the makers of the two sequels sure did.

? Gurren Lagann Vol. 2
Gainax’s crazy-ass robot show. It’s now airing on the Sci-Fi Channel at 11 .p.m. on Mondays, if you’d like to check it out.

? Get Smart Season One
A TV show written by Mel Brooks is nerdy enough for TR coverage, in case you were wondering.

? Code Monkeys Season One
I don’t watch this show. Anyone think I’m missing out? You know, besides employees of G4?