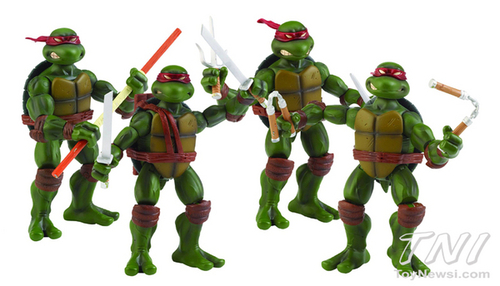 I find this very odd. It’s rare that two companies get the license to such a niche property, by which I mean Mirage’s TMNT license, not the Turtles in general. I mean, there’s got to be only so much demand for the Turtles as they appeared in Eastman and Laird’s original comic. Now, add to this the fact that NECA’s second wave of figures, including Shredder and April O’Neil were solicited about a year ago, but have effectively disappeared since then. There seems to be some serious shenanigans going on, if not outright douchebaggery.

Obviously, Playmates doesn’t give a shit about NECA or its plans. But NECA probably feels one of two ways: 1) either totally pissed that Mirage granted Playmates a second TMNT comics license right in the middle of the line, or 2) laughing uproariously, as NECA’s Turtles have been available for most of the year, and surely all the fans who wanted comic accurate TMNT figures have bought them, and Playmates’ line will be selling to no one except confused Wal-Mart moms. For NECA’s sake, I hope it’s the latter. (Via ToyNewsI)