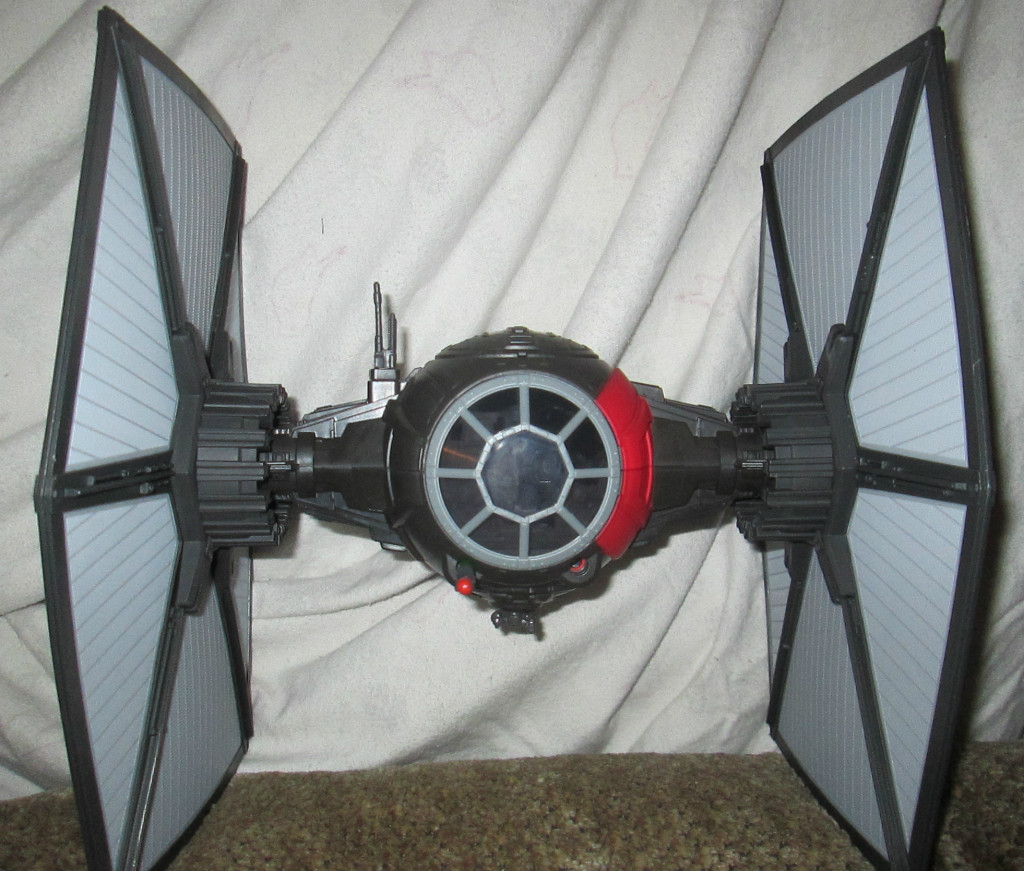 Okay, no, Hasbro did not send me the giant Black Series $170 TIE. I would not expect them to. I did, however, get the smaller version, priced to sell at $40 to reasonable kids and their parents. And I confess, there has been much “pew-pew-pewing” and “Raaaaaaarrrr-ing” around my apartment thanks to that.

No, the vehicle does not have lights and sounds. But we’ve all been making the noises with our mouths since 1977, so I assume you’re all experts by now.

The TIE is a new sculpt, with wings smaller than the recent “real-scale” version, but bigger than the vintage, so the proportions look acceptable. It fires two missiles, and does so very well – one of mine immediately got lost in my apartment after I fired it across my wife’s lap and she didn’t even notice. Nobody saw where it went. 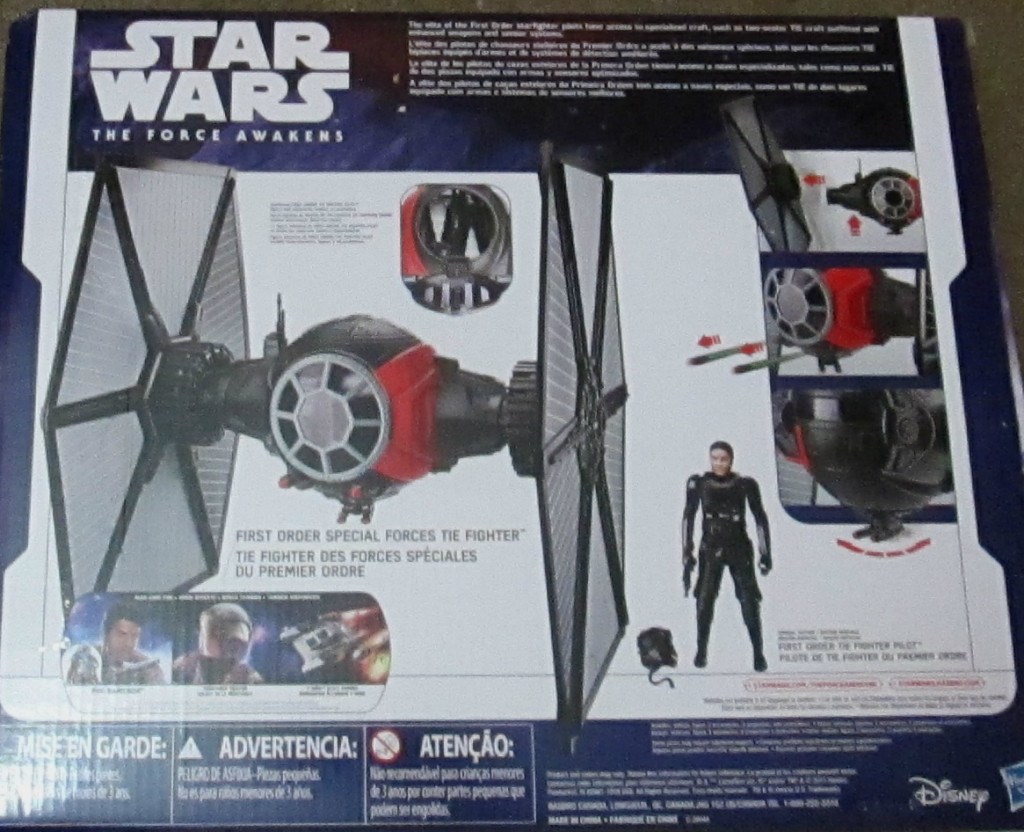 I’m not crazy about the front of the box art – feels like they could have integrated the Kylo head in better than just having a jarring red strip, but okay. Not many are buying this for the box art. The TIE pilot is well displayed. 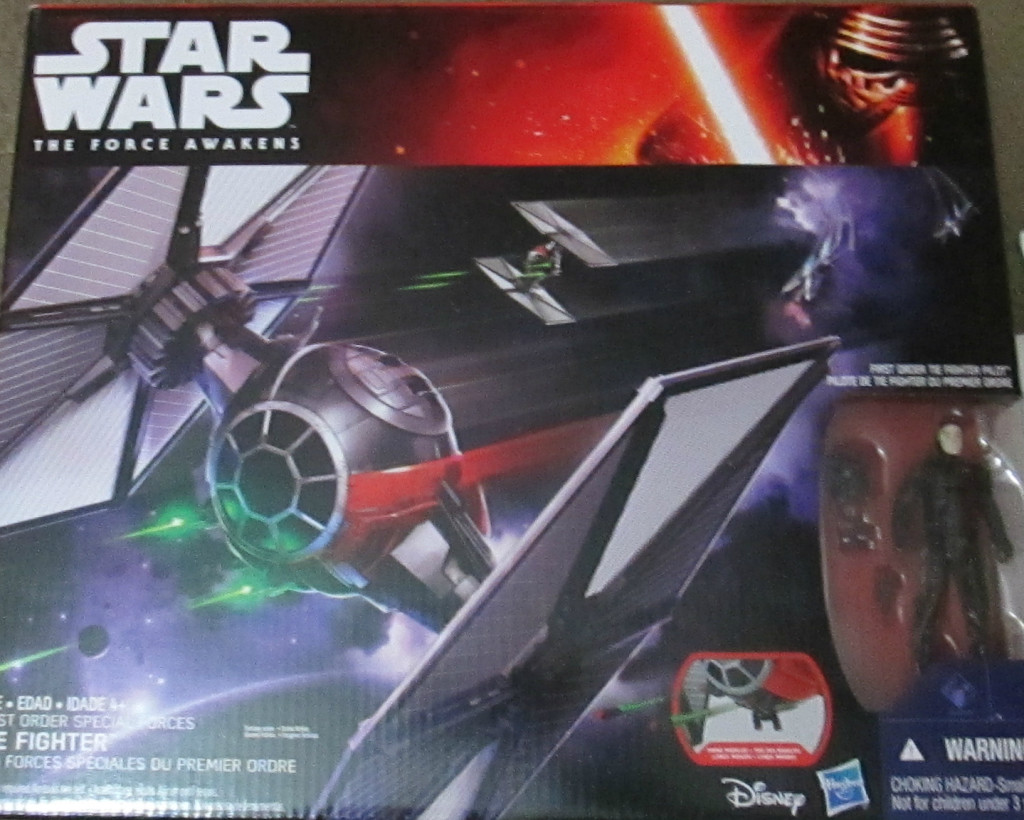 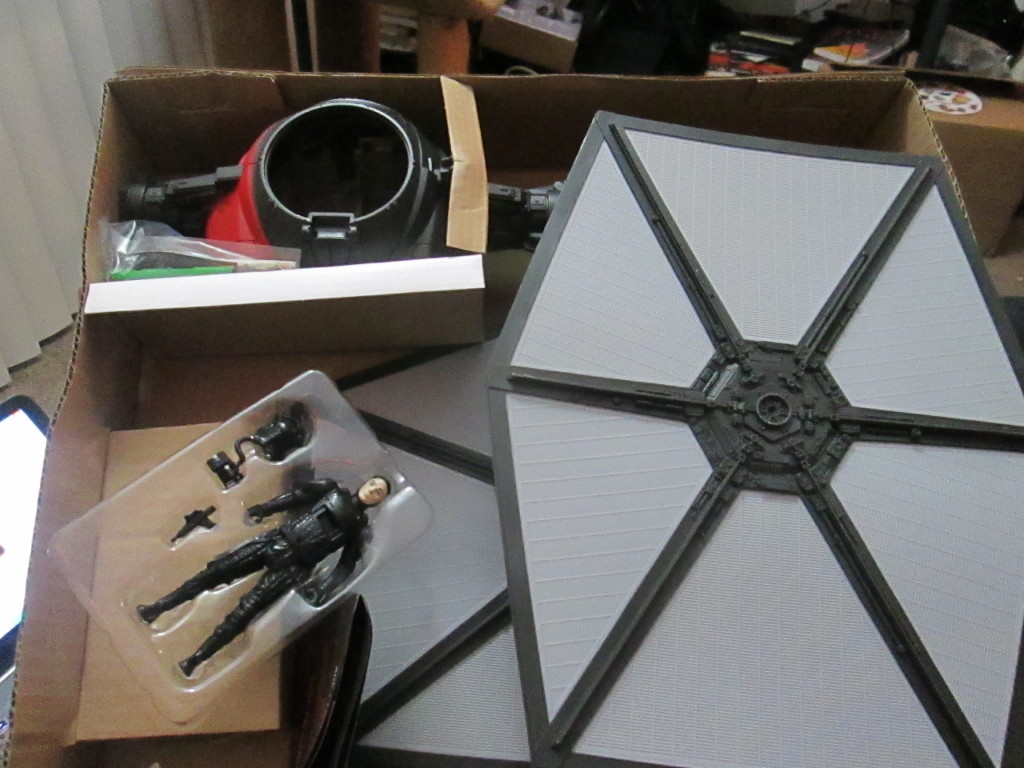 VERY little assembly is required. Pop on the wings, canopy and small guns and you’re done. Any kid can do it. 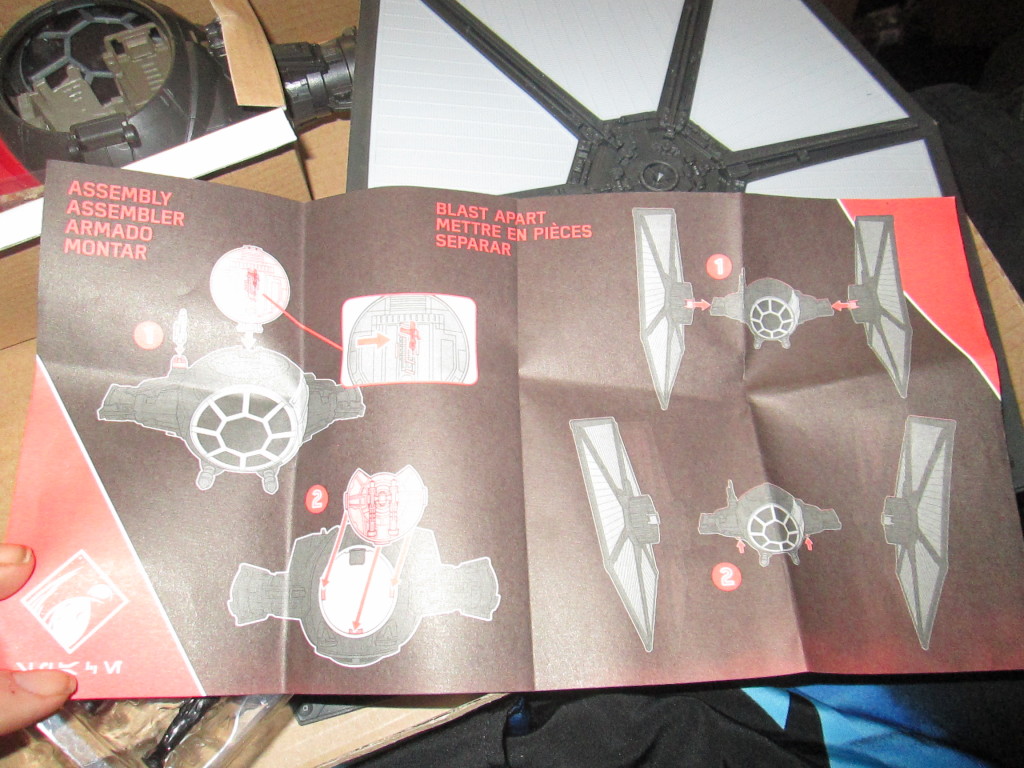 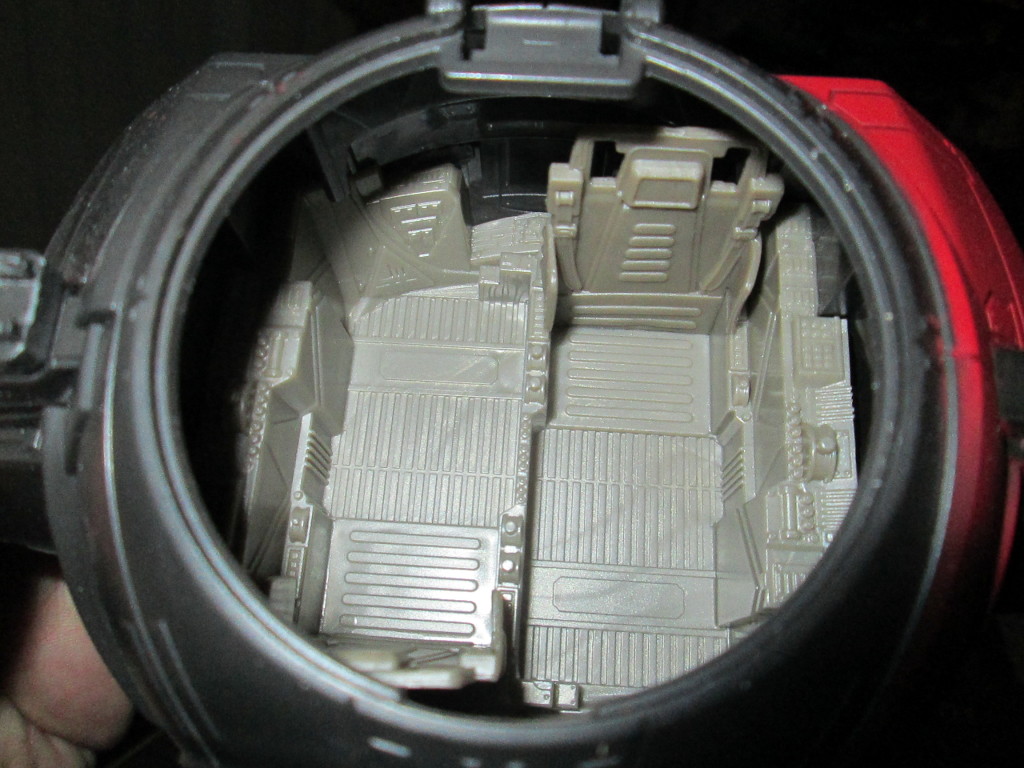 There is a rearview window, which necessitates the signature Twin Ion Engines being pushed out to the side a bit. The idea here is to have rear and forward guns, which is something childhood me always thought every ship should have, so good thinking. 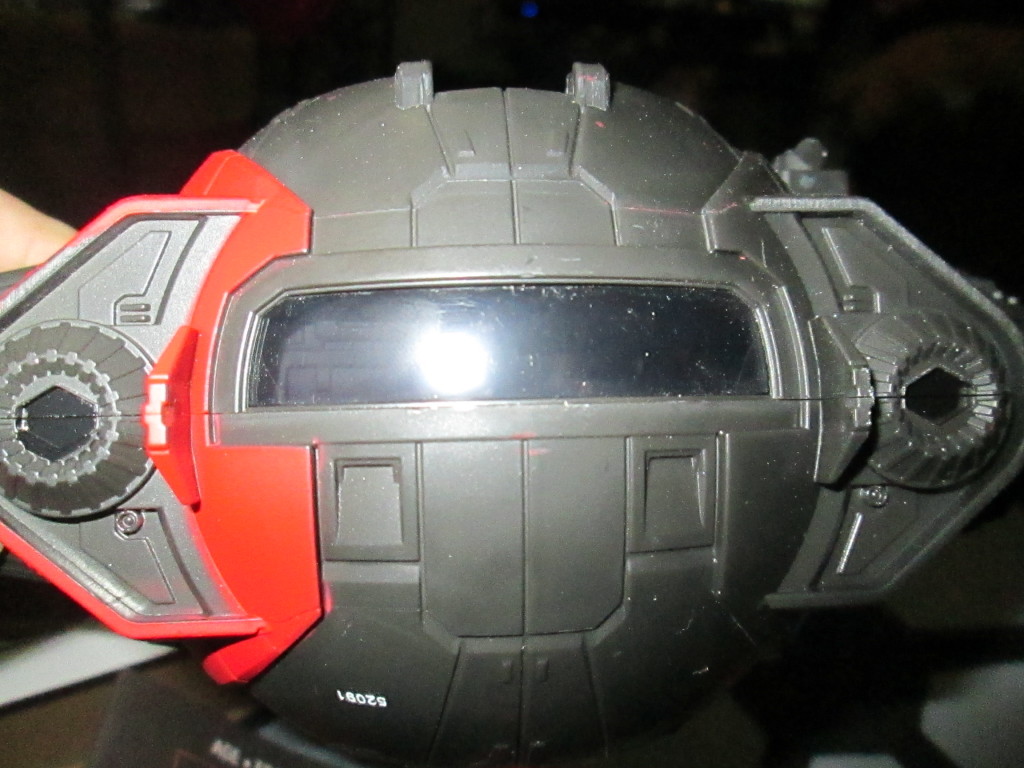 EVEN BETTER: childhood me hated losing the guns in the cockpit. This TIE solves that problem by having holsters for two TIE pilot pistols in the canopy itself. This is a very kid-friendly notion and should be imitated. 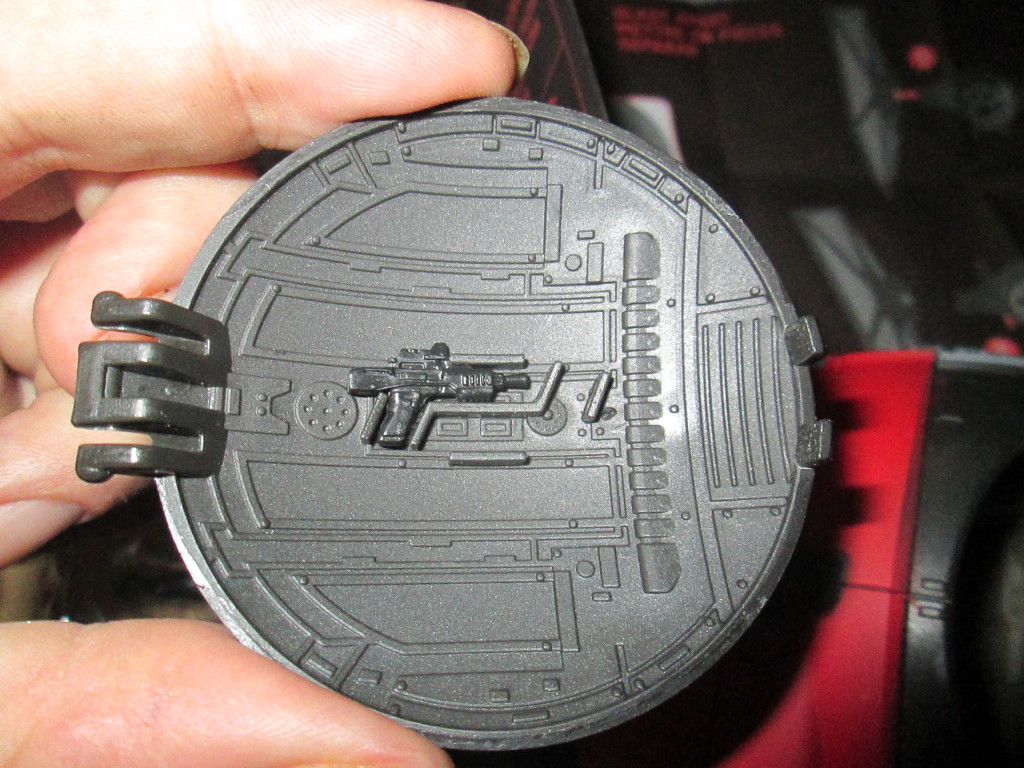 The windows in the canopy aren’t just holes like on the vintage toy – instead, they’re just painted on. No biggie. 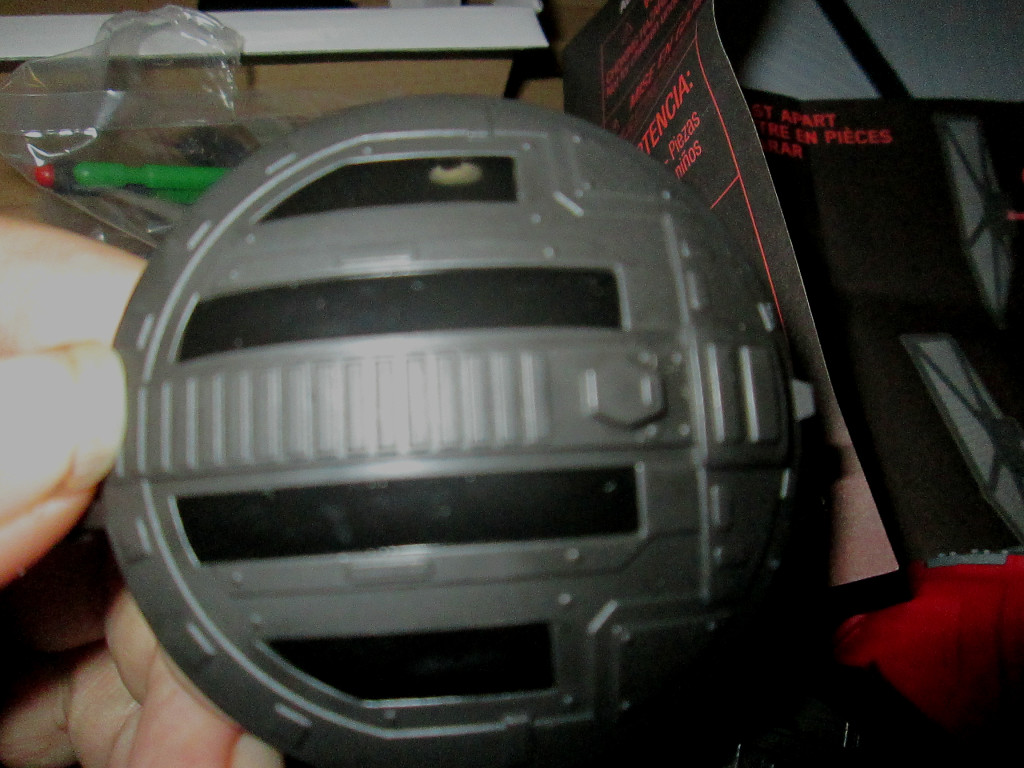 For the sake of whoever it was online ranting about a black Stormtrooper, here’s proof the First Order does still hire Caucasians too. Basic five points of articulation, though his head is ball-jointed. And his helmet is removable, though it leaves a big oblong hole in his chest when you take it off.

He does not have the red slashes on his helmet like the 6″ figure, but he does share the odd “visor-over-lenses” design. 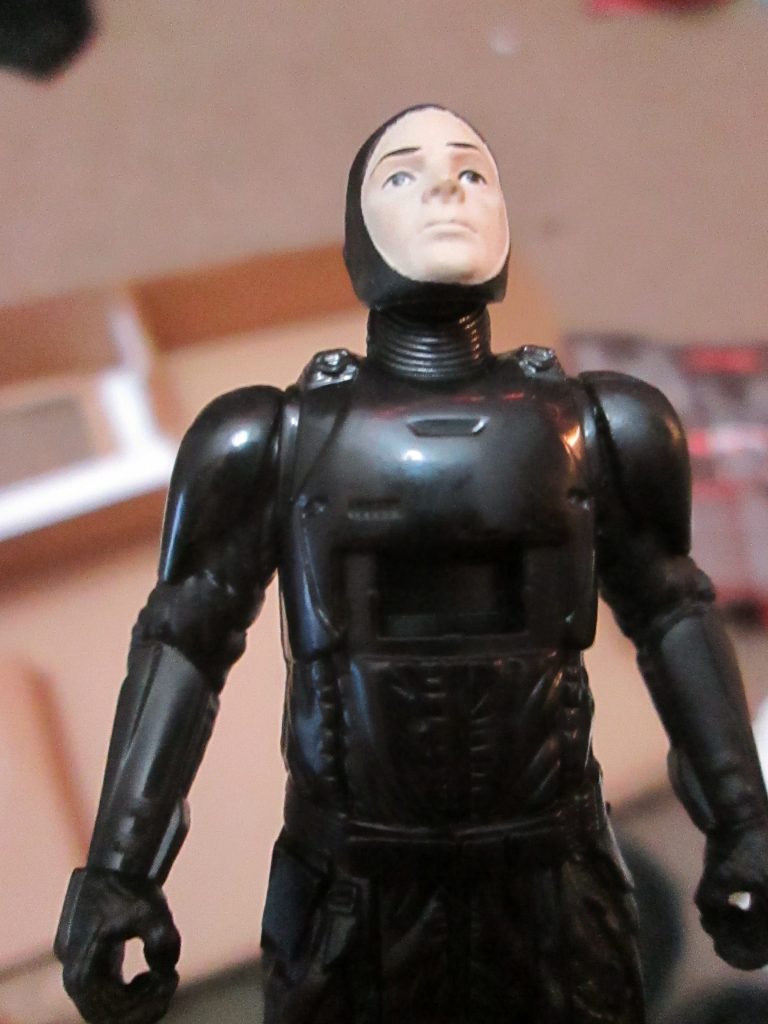 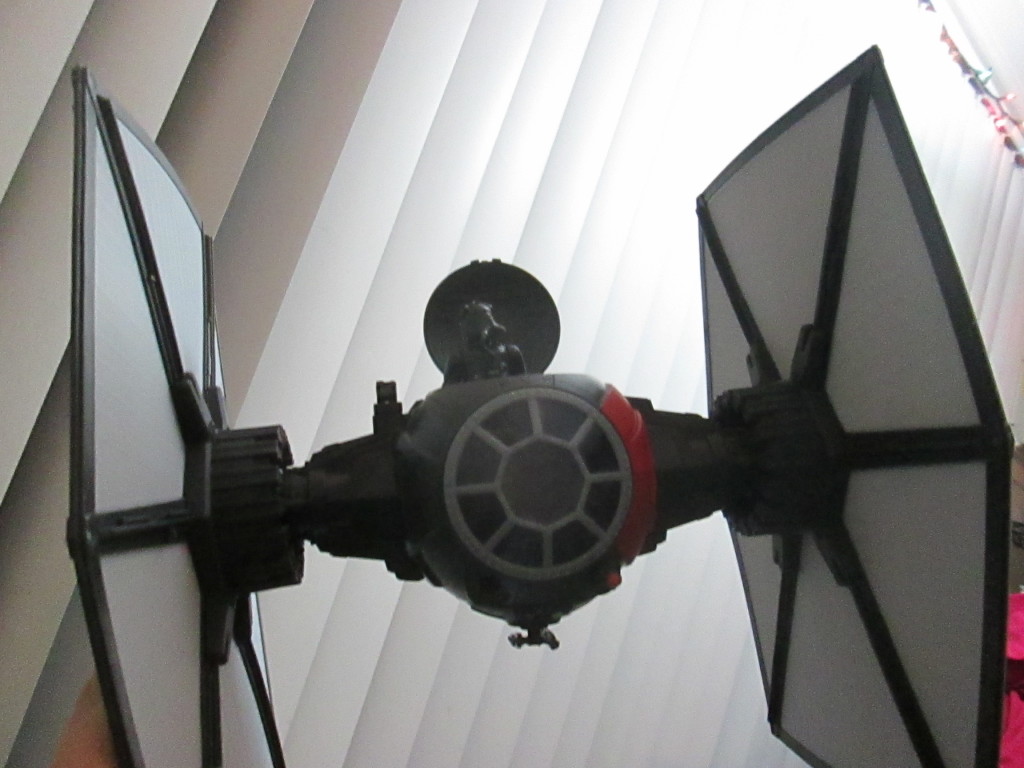 See the cannon in the left of the frame? It can pop up to look like an antenna, then fold down and swivel to fire in all directions. 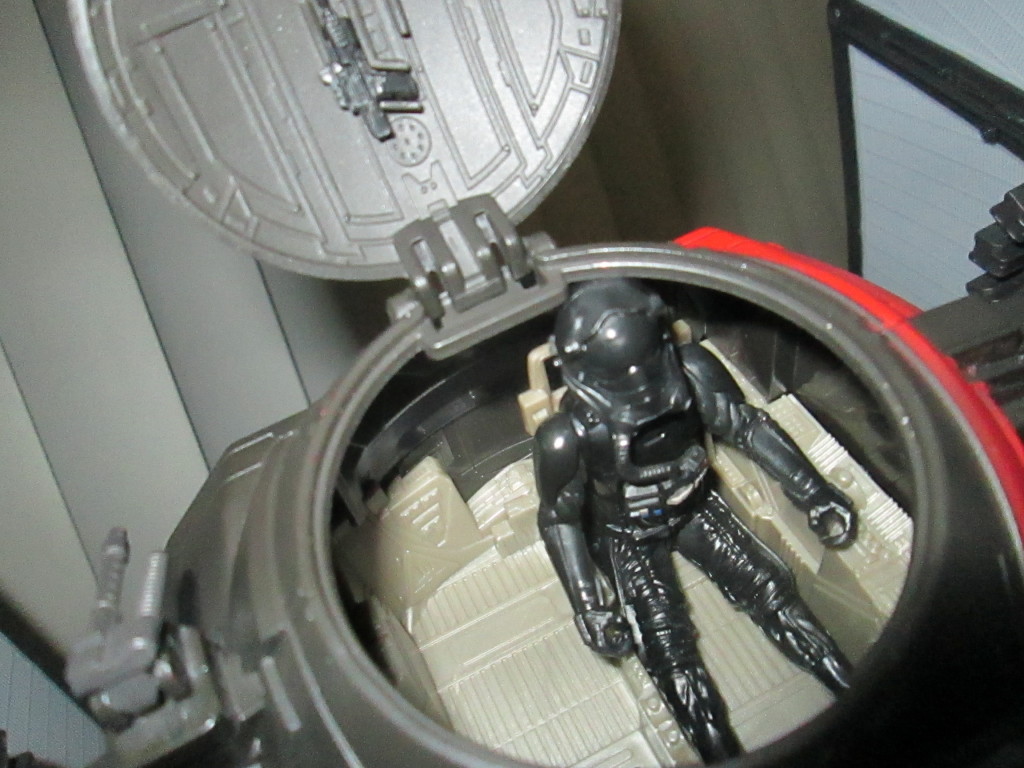 The bottom guns rotate too. 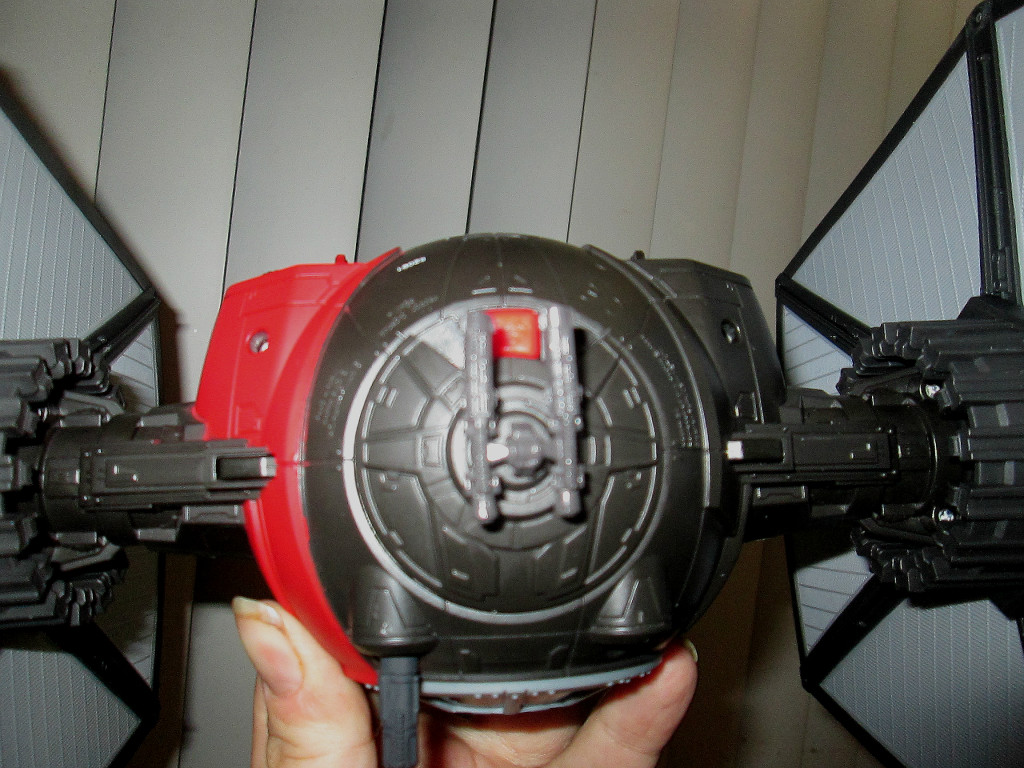 Too often, we have this false notion that toys for kids need not have details, which only collectors care about. the sculpt on this is totally up to par with other Star Wars vehicles. 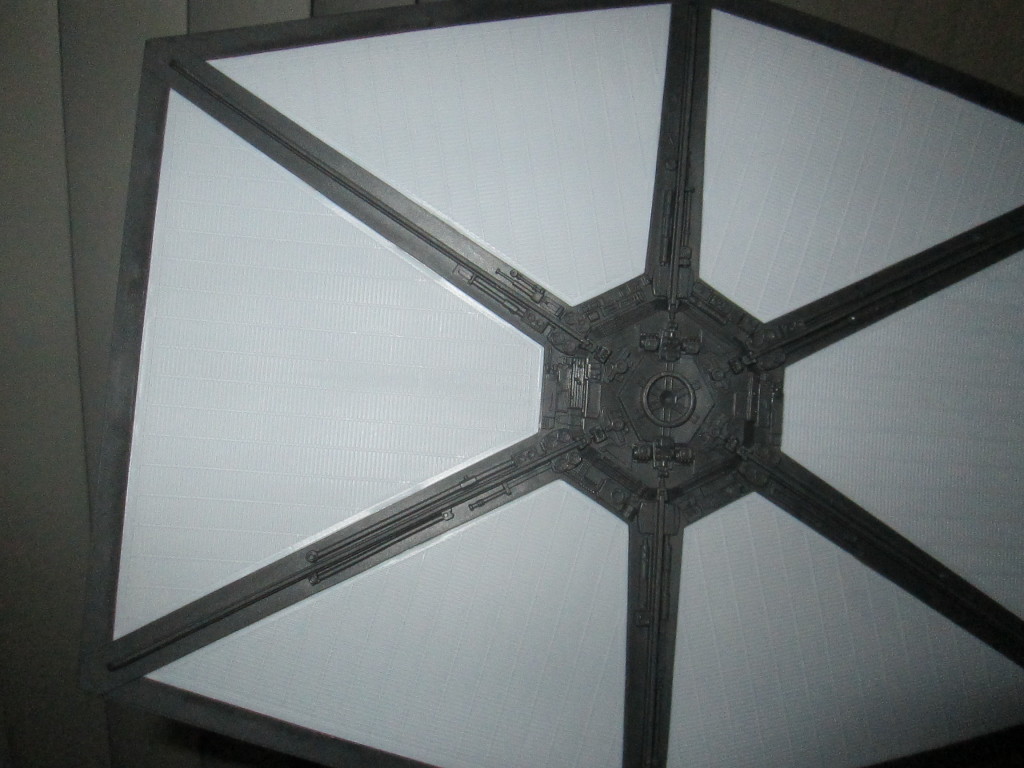 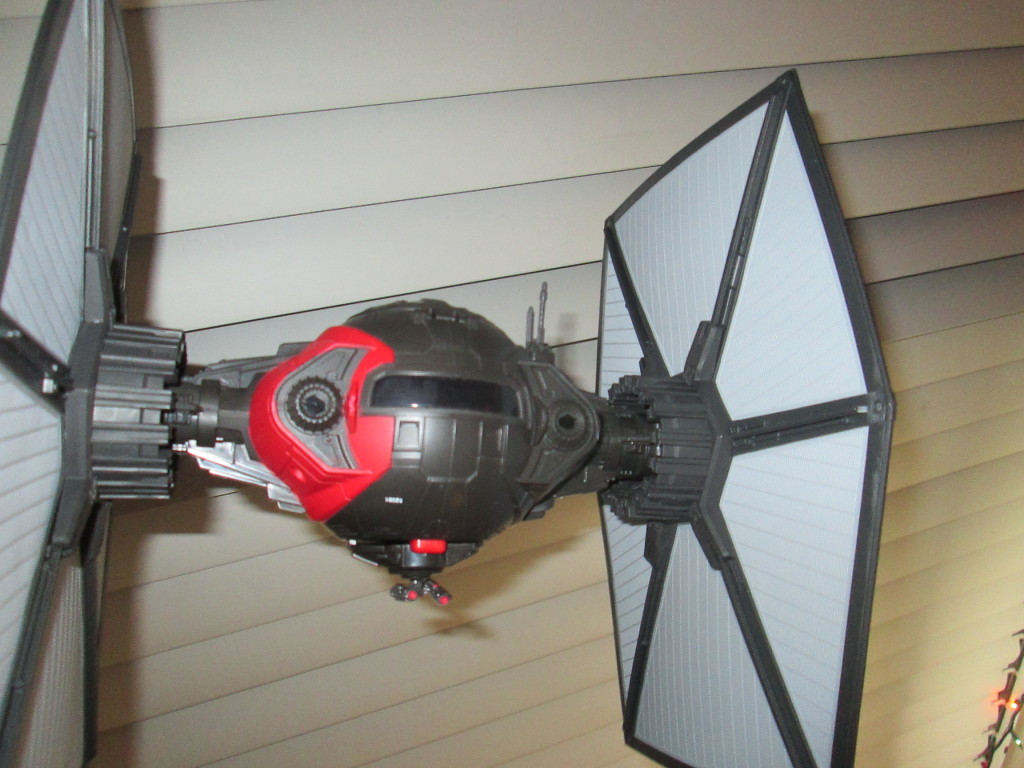 However, as you can see, the wings are not flat, but a bit warped. It stands up just fine – unless and until the classic battle-damage feature decides to eject a wing – but the bend is noticeable. 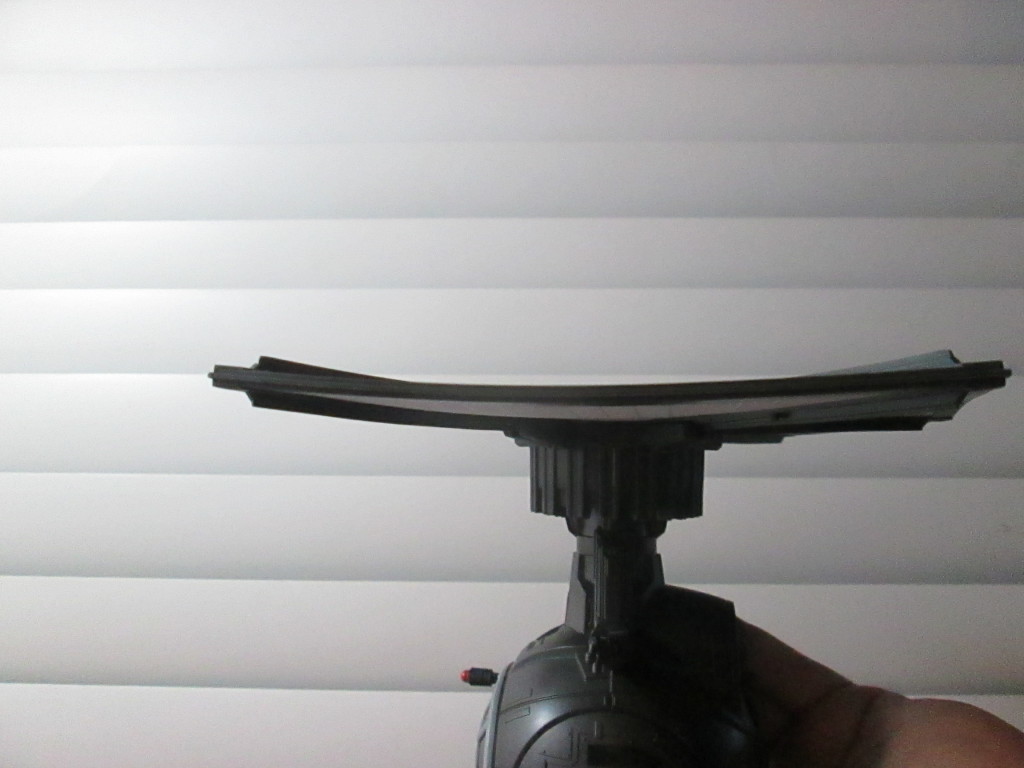 Take a close look and you’ll see the connector isn’t quite flush to the solar panel in places. A minor detail if this is to be played with regularly, but there nonetheless. 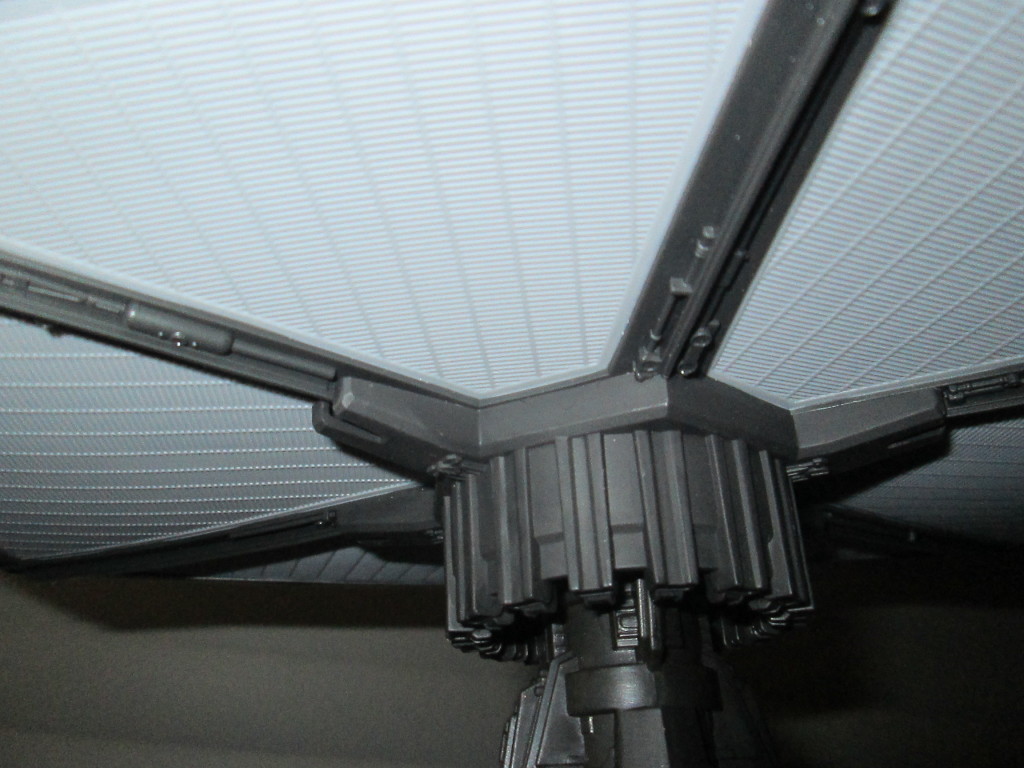 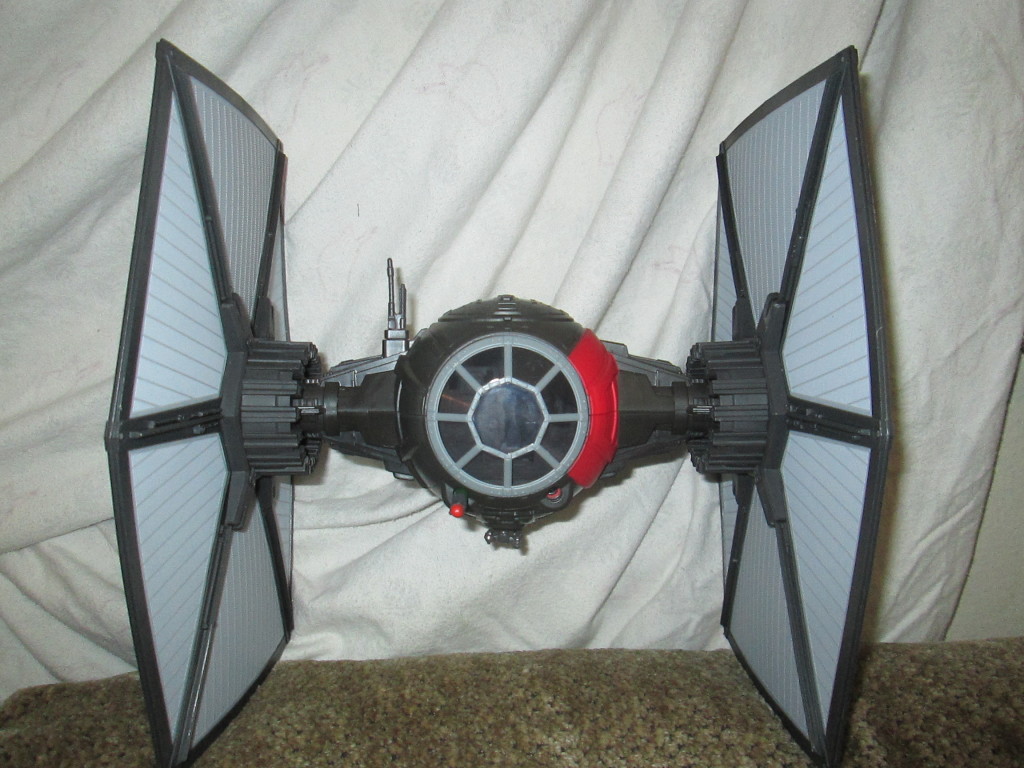 At $40, this is a decent enough value – the figure by itself would cost ten, and the vehicle has two action features (firing missiles and ejecting wings) plus things I always used to want in a spaceship like rear guns and pistol-holders. I probably wouldn’t have bought it for myself, but I am surprisingly happy with it…and may have to buy a second pilot.